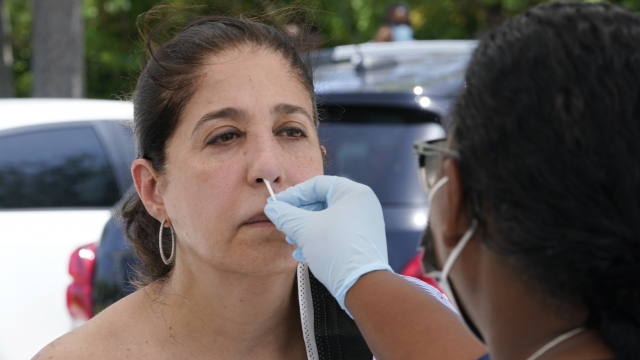 SMS
Desantis Doubles Down As Florida Again Breaks COVID Record
By Associated Press
By Associated Press
August 3, 2021
The spike has come as DeSantis and local officials have fought over how to protect children and staff as the school year begins.
SHOW TRANSCRIPT

Florida Gov. Ron DeSantis doubled down Tuesday as the state again broke its record for COVID-19 hospitalizations, insisting that the spike will soon abate and that he will not impose any business restrictions or mask mandates.

DeSantis said he expects hospitalizations to drop in the next couple weeks, insisting that the spike is seasonal as Floridians spend more time together indoors to escape the summer heat and humidity. With the much more contagious delta variant now spreading exponentially, Florida hit 11,515 hospitalized patients Tuesday, breaking last year's record for the third straight day. Hospitalizations have increased 11 times over the 1,000 COVID patients hospitalized in mid-June. About 2,400 patients are now in intensive care.

DeSantis credited his response to COVID, which has focused on vaccinating seniors and nursing home residents, for the fact that fewer Floridians are dying now than last August. A year ago, Florida was averaging about 180 COVID deaths per day during an early August spike, but last week averaged about 55 per day.

"Even among a lot of positive tests, you are seeing much less mortality that you did year-over-year," he said at a Miami-area press conference. "Would I rather have 5,000 cases among 20-year-olds or 500 cases among seniors? I would rather have the younger."

He said "media hysteria" on the record hospitalizations will cause people who might be suffering from a heart attack or stroke to avoid going to an emergency room for fear of being infected, as statistics show happened last year.

"People were having heart attacks at home because either they thought there was not enough room at the hospital or get COVID and die," he said.

Hospitals around the state report putting emergency room patients in beds in hallways and are documenting a noticeable drop in the age of patients. Some hospitals are again banning visitors or postponing elective surgeries.

DeSantis is running for re-election next year while eyeing a 2024 presidential bid and has made his refusal to impose mask mandates in public or at schools or to impose restrictions on businesses a central tenant of his national image among conservatives. He hit that message again Tuesday, saying he will not budge.

"We are not shutting down," DeSantis said. "We are going to have schools open. We are protecting every Floridian's job in this state. We are protecting people's small businesses. These interventions have failed time and time again throughout this pandemic, not just in the United States but abroad. They have not stopped the spread, particularly with delta."

The spike has come as DeSantis and local officials have fought over how to protect children and staff as the school year begins.

Broward County's school board voted last week to require facial coverings when in-person learning resumes this month, enforcing the latest recommendations of the U.S. Centers for Disease Control and Prevention. But the board reversed itself after DeSantis signed an executive order preventing mask mandates in schools, and empowering the state to deny funding to any districts that don't comply.

Broward's board had responded to the latest science on the virus, which suggests that while vaccinated people are extremely unlikely to be hospitalized or die from COVID-19, they can still spread infection among those who haven't had their shots. This revelation prompted the CDC to recommend "universal indoor masking for all teachers, staff, students, and visitors to K-12 schools, regardless of vaccination status."

"Unfortunately, Dade and Broward County lead the nation in hospitalizations," Broward County Mayor Steve Geller said Monday. "The numbers are doubling every 10 or 11 days. Geometric progression. This is horrifying."

The governor said he wants parents to decide whether their children should wear a mask to school.

A law DeSantis signed in May gives him power to invalidate local emergency public health measures, including mask mandates and limitations on business operations. It also bans any business or government entity from requiring proof of vaccination.

The Broward district now says it will encourage, but not require, students age 12 and older, as well as teachers and staff to get vaccinated. It will also encourage the use of facial coverings.