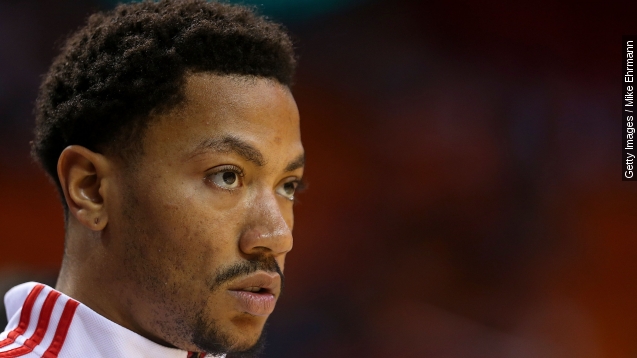 Derrick Rose has been sidelined by another injury.

He will undergo surgery Wednesday, and it's unclear when he'll return to the team. (Video via Powerade)

"It really feels like there's a black cloud hovering over everything Derrick's tried to do on the basketball court the last few years here," ESPN reporter Nick Friedell said. (Video via Powerade)

Rose has only played in 100 regular season games during the Bulls' last four seasons due to injuries.

But he's struggled to stay healthy since the start of his NBA career in 2008. (Video via Adidas)

February: Back issues force him out of 5 more games.

April: Misses 4 games due to minor ankle and foot issues.

His season ended after tearing his ACL April 29.

"It was very hard, very difficult. I mean, I love the game so much," Rose told CNN.

But not for long.

"Derrick Rose injured his right knee Friday in Portland. And now, an MRI has revealed a tear in his right meniscus," NBA TV reporter Jared Greenberg said. (Video via Adidas)

He made it back the next year but immediately missed games with sprained ankles, a strained left hamstring and a sore knee. (Video via Skullcandy)

And on Feb. 24, he tore his right meniscus again.

"So here we go again. Poor guy, right? This is the same injury that he suffered during the 2013-14 season," Fox Sports Live anchor Charissa Thompson said.

It's unclear if Rose will be ready for the Bulls' season opener against the Cleveland Cavaliers.

But his teammates have faith he'll bounce back.