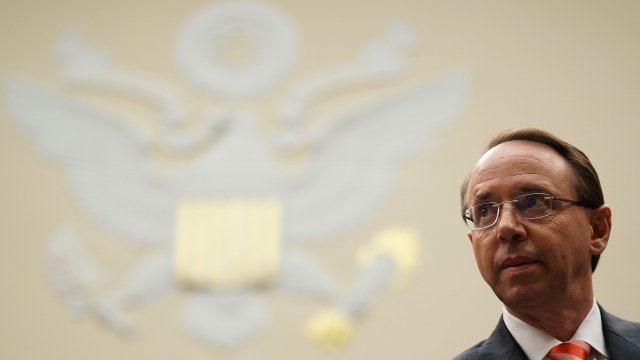 SMS
Deputy Attorney General Rod Rosenstein May Step Down In Coming Weeks
By Katie Cammarata
By Katie Cammarata
January 9, 2019
Rosenstein will reportedly leave the Justice Department around the time the president's nominee for attorney general is confirmed.
SHOW TRANSCRIPT

Deputy Attorney General Rod Rosenstein will reportedly step down from his position in the coming weeks.

According to multiple outlets, Rosenstein will leave the Justice Department around the time the president's nominee for attorney general, William Barr, is confirmed by the Senate.

Despite speculation that the deputy attorney general would be forced out of office following the firing of former Attorney General Jeff Sessions, Rosenstein doesn't appear to be facing pressure to leave.

The news of his departure isn't entirely unexpected. He has faced sharp criticism from President Donald Trump and Republicans for his decision in May 2017 to tap Robert Mueller to head the Russia probe.

And Rosenstein's future in the Trump administration came into question after reports in September that he considered secretly recording the president and using the 25th Amendment to remove Trump from office. The commander-in-chief later said he didn't have any plans to fire Rosenstein.