Deported Veterans Push To Make Their Way Back To The U.S. 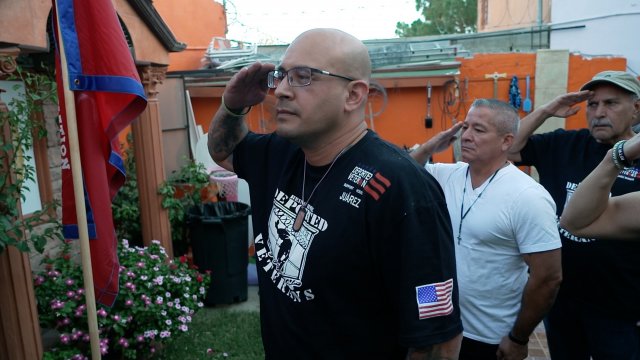 SMS
Deported Veterans Push To Make Their Way Back To The U.S.
By Ben Schamisso
By Ben Schamisso
November 11, 2021
Many veterans were deported after committing a felony, and now some are trying to change federal law that allows the practice.
SHOW TRANSCRIPT

Dozens of U.S. Military veterans live in exile in Juarez, Mexico — seeing the U.S. every day but unable to go in.

Deported and separated from loved ones, they rely on one another to survive.

Ivan Ocon leads the exiled community as the director of a veterans' support house. He works day and night to assist his brothers and sisters-in-arms, making sure they receive the benefits they're owed as veterans and giving shelter to deported veterans, who can stay for as long as they need.

The 44-year-old served for nearly seven years, including a deployment to Jordan during the Iraq war.

"While other soldiers were jumping over a wall and stepping around the mud, I was diving into the mud and crawling through it," Ivan said. "I was a soldier."

His home in Juarez is a living museum of his time in the U.S. Army, with three Army achievement medals and a good conduct medal on display. Also covering his walls are photos of his daughter in the U.S. He hasn't seen her in 15 years.

IVAN OCON: The last time I saw her, she was 3 years old.

BEN SCHAMISSO: What does it feel like to be so close, yet so far?

IVAN: This is the darkness (Juarez) and that's the light (El Paso) to me. You know, the U.S. is the line where I need to get to.

Ivan was born in Juarez but moved to the U.S. with a green card when he was only 7 years old. He grew up in Las Cruces, New Mexico, feeling as American as any other kid.

When he turned 18, he decided to give back to his adoptive country.

"It was one of the proudest moments in my life, like when you raise your right hand and you're swearing in," Ivan said. "It felt like I was serving a bigger purpose than myself."

Two decades later, the U.S. deported him to Mexico after he served nine years in prison for aiding and abetting an armed kidnapping.

Ivan says he wasn't a participant but was aware of his brother's action in the crime and failed to report it.

"I should have stopped him, but I mean there's nothing I could do, you know," Ivan said. "It is too late for that, and we just move forward and one mistake shouldn't define the rest of our lives."

The U.S. has been deporting green card veterans convicted of certain crimes for decades, though we don't know how many because the government has failed to keep tabs. Advocates say the number could be in the thousands.

For Ivan and every other exiled vet, deportation would have been entirely prevented had they become citizens during their military service, but misinformation and red tape often get in the way.

"A lot of veterans commit mistakes, do crimes, and guess what?" Ivan said. "If they're citizens, they go back right into the world with their families, and us? We don't have that opportunity."

Just 50 miles away in the U.S, in Las Cruces, New Mexico, Ocon's sister and nephew take regular walks to a local mural honoring Ocon and other deported vets.

CLAUDIA OCON: I come over here, I pray as if it was him, ask God to bring him alive, to keep him safe. Mexico is really ugly right now, and it's violent. There was a shooting not too long ago blocks from his house in broad daylight.

SCHAMISSO: What do you want people to know about your brother?

CLAUDIA: He was the man of the house. He was the one who had big hopes and dreams for getting our family out of poverty, which is why he joined the military in the first place. And when people say anything different about him, I will always be the first to shout it from wherever I need to shout that he is a hero and that he deserves to be here.

For the first time in years, many deported veterans have hope after the Biden administration promised change.

For now, though, it's just words. Little action has been taken so far to bring home veterans like Ivan Ocon.

Tired of waiting, Ocon and a Yale Law School clinic recently joined forces to petition for his return — and to set a precedent for hundreds of similar cases.

"If they want to repatriate deported veterans, they should start with Mr. Ocon," Casey Smith, J.D. candidate at Yale Law School, said.

Smith is one of the students representing Ocon. She says the law has changed in his favor since he was deported in 2016.

"The Supreme Court made two decisions that made clear that the crime for which he was convicted is no longer considered a crime of violence and cannot be an aggravated felony bar to his naturalization," Smith said.

The ball is now in the Biden administration's court. The students recently submitted Ocon's naturalization application, urging the government to expedite it.

SCHAMISSO: How hopeful are you that you'll soon be home with your daughter?

In the meantime, Ocon and fellow deported veteran, Jose Francisco Lopez, help just about anyone experiencing hardship in Juarez.

Lopez lives at the veterans' support house. He served in Vietnam and was deported 20 years ago after serving prison time on drug charges.

"I risked my life in Vietnam, and they didn't care, you know, they just threw me out like I'm trash," Lopez said.

"I don't know my grandkids," Lopez said. "That's the reason I want to go back, so I can meet my grandkids."

Over the years, many deported vets have died in exile. For now, it's only after their deaths that their bodies are allowed to go back to the U.S. to be buried at a military cemetery, but thanks to the relentless work of advocates like Lopez and Ocon, that could soon change for some of them.