Department Of Justice Pledges To Focus On White-Collar Crime 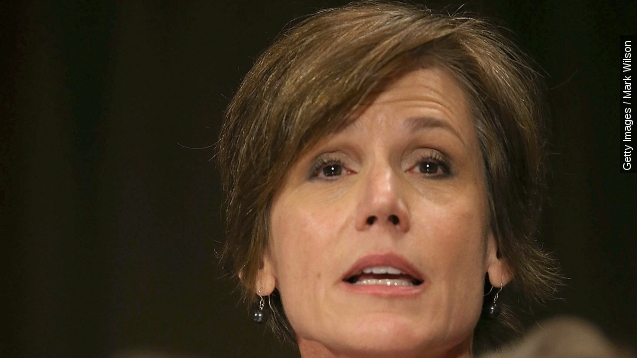 The Department of Justice is cracking down on white-collar crime after years of criticism.

In a seven-page memo provided to The New York Times, Deputy Attorney General Sally Yates gave federal prosecutors new guidelines to use in white-collar cases. Investigators must now focus on individual employees, not just their companies, at the start of an investigation. And companies will have to hand over all "relevant facts" about an individual in order to get any "credit for cooperation."

This is the first major policy announcement since Loretta Lynch became the Attorney General in April. And even though the guidelines are effective immediately, they are just guidelines, meaning they aren't binding for federal prosecutors.

The change comes after the DOJ was criticized for not being hard enough on Wall Street criminals, especially after the financial crisis in 2008, during which no Wall Street executive was held accountable. Instead, companies paid billions of dollars in fines.

This, of course, was followed by failed promises to hold those responsible accountable and lead to then-Attorney General Eric Holder telling lawmakers those institutions were too big to prosecute. (Video via C-SPAN)

"We have to remember here is the main reason that we punish illegal behavior is for deterrence. These civil settlements don't provide deterrence," said Senator Elizabeth Warren.

"While institutions have paid large fines and in some cases admitted guilt, too often it has seemed that the human beings responsible get off with limited consequences or none at all, even when they have already pocketed the gains. This is wrong, and on my watch it will change," said Hillary Clinton.

This new plan to investigate corporate crime also comes after a report by Syracuse University analyzed DOJ data and showed federal prosecution of white collar crime hit a 20-year low. According to the report, the decline doesn't "necessarily indicate there has been a decline in while collar crime." Instead, it points to changes in administration and congressional laws as reasons for the decline. (Video via Syracuse University)

In the memo, Yates acknowledges the challenges prosecutors face while investigating corporations, like trying to charge a top executive with criminal intent when so many decisions are made at different levels. And she credits these challenges as the reason for a change in policy.