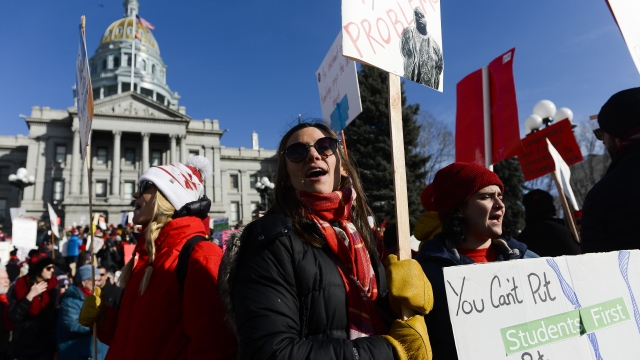 The agreement comes after months of negotiations and a three-day strike.

Denver teachers are ending their strike and returning to work after reaching an agreement with the school district.

The Denver Classroom Teachers Association and Denver Public Schools district signed off on a compromise early Thursday morning, according to Newsy affiliate KMGH-TV. The agreement comes after months of negotiations and a three-day strike.

In a win for the union, the deal includes a 7 percent increase in starting base salary, bringing it up to $45,800. Teachers will also receive a cost of living increase in the second and third years of the agreement, as well as an updated salary scale that will make it easier for teachers to receive raises. The groups also agreed to end "exorbitant five-figure bonuses" for senior district administrators.

And in a win for the district, union members agreed to keep incentives for educators who work in low-income schools and in positions that are difficult to fill, as well as retention bonuses. The union had pushed to put that money toward raising starting salaries, but the school district wanted to keep it.

The deal still needs to be ratified by the full union membership and approved by the school board to go into effect.

The district superintendent asked teachers to return to their classrooms Thursday or take an unpaid day off. As CNN reports, a spokeswoman says each day of the strike cost the district more than $400,000.