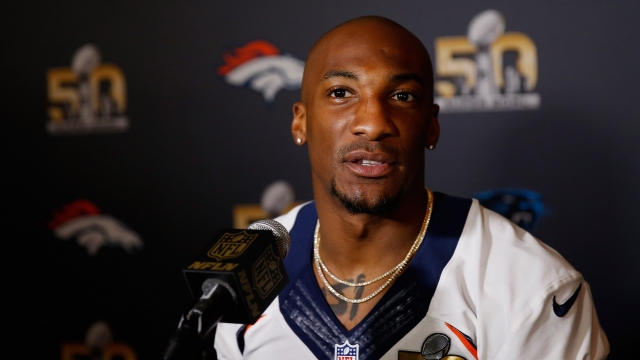 Denver Broncos Pro Bowl cornerback Aqib Talib is reportedly OK after he was shot in the leg at a Dallas nightclub early Sunday morning.

Dallas police said someone pulled a gun during a fight at the V Live club just before 3 a.m. Talib and one other person suffered non-life-threatening injuries. Police are still investigating.

Talib, who went to high school near Dallas, was allegedly involved in another fight last year at a different nightclub in the same area.

In 2011, the reigning Super Bowl champion was indicted for aggravated assault after police accused Talib and his mother of shooting at his sister's boyfriend in nearby Garland, Texas. Police eventually dismissed the charges due to lack of evidence.

The latest incident comes at a bad time for Talib. He and his Broncos teammates are set to visit the White House on Monday in recognition of their Super Bowl win last season. But the team doesn't think he'll be medically cleared in time for the trip.

The NFL is reportedly gathering information on the situation but offered no comment when ESPN asked.

This video includes images from Getty Images and a clip from NESN.