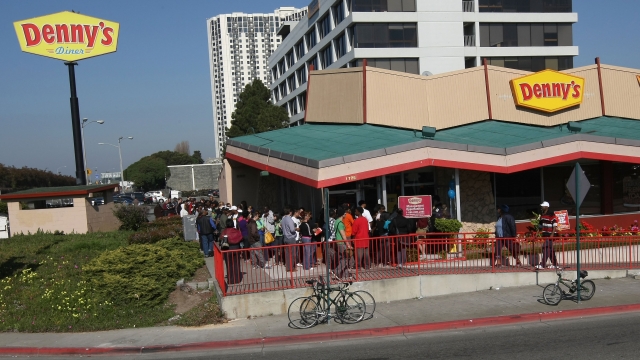 SMS
Denny's Settles Los Angeles Racial Discrimination Lawsuit
By Ben Lawson
By Ben Lawson
February 5, 2016
Denny's has settled a lawsuit in which a black couple claim they were asked to pay for their meal early at a Los Angeles location.
SHOW TRANSCRIPT

Denny's has settled a lawsuit with a black couple who say they were discriminated against when they were asked to pay for their food in advance.

The alleged incident occurred at one of Denny's Los Angeles locations. The restaurant's owner said past customers had left without paying, and he was concerned about the large size of the couple's order. (Video via Denny's)

But a white customer at the restaurant at the time testified that he wasn't asked to pay before eating and argues the restaurant's request was motivated by race.

Denny's has a history with lawsuits accusing the chain of racial discrimination. In 1994, it agreed to pay $54 million to settle suits from thousands of black customers who claimed the restaurant had treated them unfairly. (Video via Denny's)

Both sides in the recent lawsuit appear to be keeping the terms of the settlement confidential.