Dennis Rodman Is Back In North Korea, 'Trying To Open A Door' 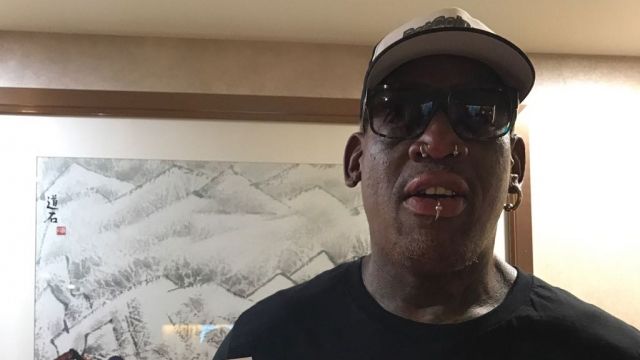 The former NBA star confirmed on Twitter he arrived in North Korea and promised to discuss his "mission" when he returns to the U.S.

Dennis Rodman is back in North Korea.

"Give us luck, and praise us for doing what we doing. It's all about doing one thing; it's about peace," Rodman said.

Rodman flew into Pyongyang from Beijing International Airport on Tuesday. The trip was sponsored by PotCoin, a cryptocurrency for legalized marijuana.

The former NBA star told reporters before his flight that he is "just trying to open a door" during his visit.

Rodman confirmed on Twitter that he arrived in the country and promised to discuss his "mission" when he returns to the U.S.

North Korea's latest deployment of missiles is its fourth test in just one month.

Rodman has visited North Korea several times over the past four years to promote what he calls "basketball diplomacy."

During his trip in 2014, he and other retired NBA players traveled there for an exhibition game. But the visit seemed to do more harm than good for Rodman's reputation.

When Rodman returned home, he faced heavy criticism after video surfaced of him singing "Happy Birthday" to leader Kim Jong-un.

It's unclear if President Donald Trump was aware of Rodman's travel plans. But in 2013, Trump praised Rodman's trips to North Korea, calling him "smart."

This time around, Rodman is expected to spend four nights in North Korea.