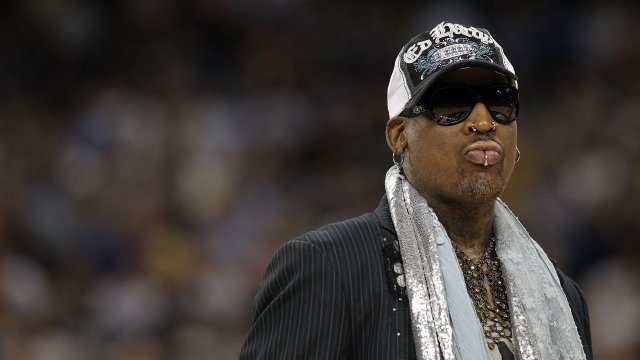 SMS
Dennis Rodman Reportedly Headed To Singapore During Trump-Kim Summit
By Ethan Weston
By Ethan Weston
June 6, 2018
Rodman has visited North Korea five times since 2013, and he was a contestant on Trump's "Celebrity Apprentice."
SHOW TRANSCRIPT

Former basketball star Dennis Rodman will reportedly be in Singapore during the planned summit between North Korean Leader Kim Jong-un and President Donald Trump, according to a New York Post report.

If Rodman goes, it's not exactly clear why he'll be there. The Post says it's possible Rodman will play a role in the negotiations. But other outlets report it might just be a publicity stunt.

As the Washington Post points out, though, it's not unthinkable Rodman could be there as an icebreaker between Kim and Trump — he has a history with both leaders, after all.

Rodman was on Trump's show "Celebrity Apprentice" twice. And Rodman has made the trip to North Korea five times since 2013 and often spends time with Kim while there.

But it's also possible there is no planned trip. Rodman's representative told the New York Post that no trip to Singapore had been confirmed.