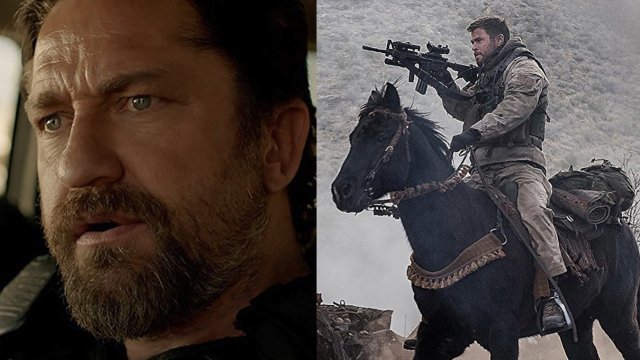 SMS
'Den Of Thieves' And '12 Strong' Fight For No. 2 Spot At Box Office
By Jamal Andress
By Jamal Andress
January 21, 2018
Both films had to battle for second place behind "Jumanji," which has been at No. 1 for three weeks and counting.
SHOW TRANSCRIPT

Taking the No. 1 spot for the third week in a row is "Jumanji: Welcome to the Jungle," bringing in an estimated $20 million in its fifth week out. After pulling in $316 million domestically, "Jumanji" is now Dwayne "The Rock" Johnson's second-highest grossing film.

Behind, you guessed it, a "Fast and Furious" movie — specifically "Furious 7."

That's a solid start, considering the war film only cost $35 million to produce. It's also a good sign for its lead actor, Chris Hemsworth.

Outside of Hemsworth's booming success as the Prince of Asgard, he's had some trouble selling movie tickets. The success of films like "12 Strong" can hopefully lead to more movies where Hemsworth isn't carrying a hammer.

Beating box-office expectations this weekend is "Den of Thieves," bringing in an estimated $15 million in its debut weekend. "Den of Thieves" managed to overcome mixed-to-negative reviews by offering good old-fashioned adrenaline and star power.

And, of course, stealing its inspiration from a much better movie. But remember, all's fair in love, war and selling movie tickets.

As for next week, all good things must come to an end — including and especially the young-adult-novel dystopian movie trend.