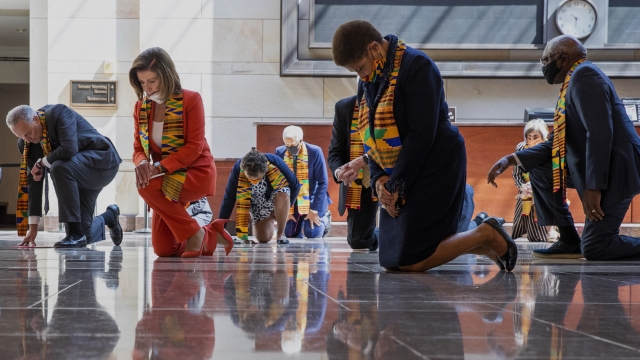 Congressional Democrats are kicking off the week with a plan to crack down on police violence. Two weeks after George Floyd was killed in police custody, and after hundreds of thousands of Americans protested his death and that of many others, Democrats are proposing systemic changes to American policing in what they’re calling the Justice in Policing Act of 2020.

The sweeping legislation would require body cameras and ban choke holds and some no-knock warrants. It would get rid of qualified immunity, which makes it difficult to prosecute officers, and limit the federal government transfer of military weaponry to state and local departments.

The 134-page bill stops short of defunding police, but Democrats say it is designed to make departments more transparent, including creating a national use of force standard, collecting data on a variety of issues including use of deadly force and requiring states to report that data to the justice department. It would also create a database to track police misconduct, something Congressional Black Caucus Chairwoman Karen Bass has repeatedly said is one of her main priorities.

Congressional Democrats knelt in Emancipation Hall for eight minutes and 46 seconds, the amount of time Officer Derek Chauvin's knee was on Floyd's neck, prior to introducing the package.

The House Judiciary Committee will hold a hearing Wednesday to address police brutality. Leadership is hoping to mark up the legislation quickly and bring members back for a floor vote in the next few weeks.

As Democrats were introducing the legislation, House Minority Leader Kevin McCarthy tweeted his appreciation for police officers, telling them, in part, "Democrats want to defund you, but Republicans will never turn our backs on you."

Democrats at the announcement were optimistic the legislation would easily pass the House, but said they weren't confident the Senate would follow suit. The Senate failed to pass legislation last week that would make lynching a federal crime. Sen. Rand Paul held up the bill, which passed the House 410-4,saying he wanted to narrow the definition of lynching before he'd support it. Minority Leader Chuck Schumer is calling on Majority Leader Mitch McConnell to bring up the Justice in Policing Act before the July 4th recess.