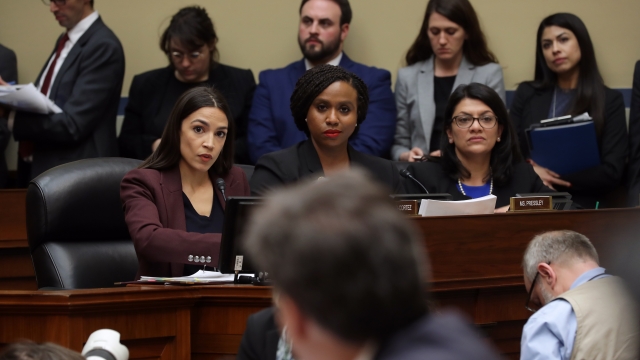 SMS
Democrats Suffer Liberal Growing Pains in New Congress
By Kellan Howell
By Kellan Howell
March 7, 2019
From the Green New Deal and Medicare for all, to U.S. relations with Israel, Democrats are split on a lot of issues. Is it just growing pains?
SHOW TRANSCRIPT

In the first two months since taking over the House Majority, Democrats have been split on several high-profile issues. But what might look like a party in chaos to some, is actually pretty normal for Democrats according to party insiders.

"When did we ever have perfect consensus in the Democratic Party? The answer is never," said Will Marshall, president of the Progressive Policy Institute.

The new Democratic House majority is one of the most racially and generationally diverse in history. So, Democratic operatives like Lanae Erickson say, it’s not surprising to see these disagreements unfold on things like the Green New Deal, Medicare for all and U.S. relations with Israel.

"I think it's kind of like when you’re on a first date and you're trying to figure out where are the sensitivities and what do we need to work through and what do we see from a different perspective?" said Lanae Erickson, senior vice president for social policy and politics at Third Way, a center-left think tank.

Liberal freshman Rep. Alexandria Ocasio-Cortez is one of a handful of Democrats who have challenged more senior members recently, but even she says it's all part of a learning process.

"I think it’s a learning experience and its part of the fact that when we elect the most diverse democratic caucus that we have in pretty much ever, it means that we have new communities at the table, new conversations that need to be had, and we have to learn how to have conversations differently every time," she said in an interview with CNN.

Still, the fissures inside the House majority has stoked concerns that members on the far-left could form their own splinter group, much like Tea Party conservatives did when they formed the House Freedom Caucus.

"They’ve run all of the moderates out of the Republican Party. That's a much more conservative party than Democrats are to the left. That's why I don't think we’ll see the rise of a kind of left Tea Party in the Democratic House caucus," he said.

A recent poll from Real Clear Politics found most Democratic voters rate themselves as moderate, while half of Republican voters consider themselves to be very conservative.

"I think the Democratic coalition is always more like herding cats than the Republican coalition and in part that’s because of who they represent. Republicans represent a coalition that is overwhelmingly self-described conservative. That is more and more and more homogeneous. Democrats represent a bigger and bigger diversity of people and places and perspectives and so we’re just going to have a more caucus conversation," Erickson said.

The best way to diffuse the tension, Erickson says, is for Party leaders to make sure members on all sides are heard.

"I think if I had some advice to give it would be; be ok with some disagreement in the party, let it air itself out," she said. "Let the moderates have their votes, let the liberals have their hearings and then we will all be stronger for having those conversations."