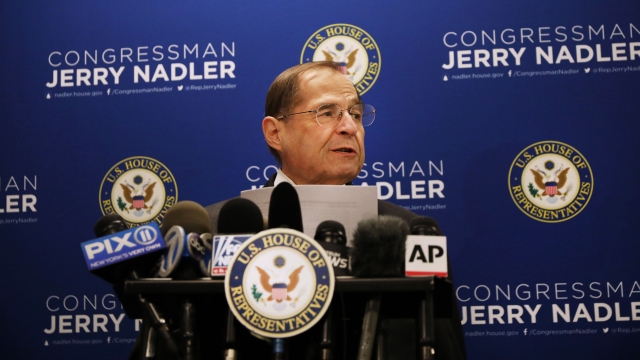 SMS
Democrats Reject DOJ's Offer To View Less-Redacted Mueller Report
By LeeAnne Lowry
By LeeAnne Lowry
April 20, 2019
The Democrats said they couldn't agree to the rules for viewing the report, and that they'd only accept an unredacted version.
SHOW TRANSCRIPT

Democrats rejected an offer to see a less-redacted version of the Mueller report on Friday.

The lawmakers would have been allowed to bring one staff member each, and they would be filmed as they read. Any notes they took would have had to stay at the Justice Department. Those notes could be transferred by Justice Department officials to Capitol Hill for filmed review sessions.

The Democrats said they couldn't agree to the rules for viewing the report, and that they'd only accept an unredacted version. But, they noted they're willing to discuss other ways to protect sensitive information.

House Judiciary Committee Republicans responded that Barr "has given unprecedented accommodations to Chairman Nadler, and it’s unconscionable the chairman refuses receipt of information he’s claimed for weeks Democrats are ‘entitled to.’"

Earlier that day, Nadler subpoenaed the full, unredacted Mueller report and underlying materials. He said the documents are necessary to make a decision about whether the president obstructed justice.

The subpoena requires Barr to turn over the documents by May 1.