2020 Dems Pitch Progressive Ideas During We The People Summit 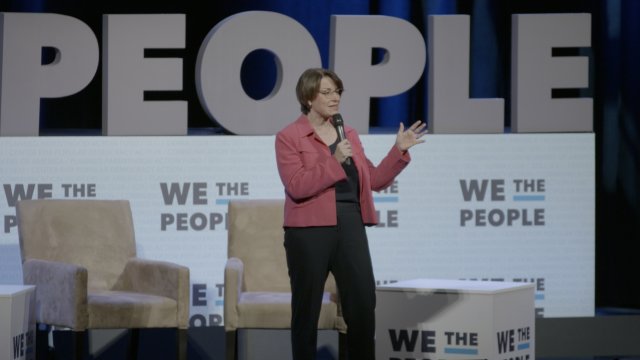 2020 Democrats are banking that progressive ideas -- once thought to be out of the mainstream -- will be key to winning back the White House.

"Imagine, the establishment went crazy [the] media went nuts, still is," said Democratic presidential candidate Bernie Sanders. "Imagine the United States joining the rest of the industrialized world and guaranteeing health care to all people as a right not a privilege."

Eight 2020 Democratic presidential hopefuls gathered in Washington during the We The People Summit to discuss issues like income inequality, health care, criminal justice reform and climate change. It was the first major political forum for presidential candidates.

Newsy spoke to 2020 presidential hopeful Julian Castro, who predicted overwhelming success for Democrats next year which could enable the party to pursue the ambitious agenda outlined by the candidates.

"I believe that on January 20, 2021 at 12:01 pm we're going to have a Democratic president, a Democratic Senate and a Democratic house," said Julian Castro. "It's going to give us an opportunity to do progressive things," he added. "The lesson of 2009 [and] 2010 is that we need to make sure that we go for it we did that on health care, we should do that on other issues as well. And that includes the minimum wage."

Other major topics like court packing, Medicare for all, election reform, minimum wage and abolishing the Electoral College were debated during the event. Among most candidates there was a general consensus on these key issues making it difficult for some to get behind a single candidate.

"I haven't decided on what candidate that I'm supporting at this time," said Christina Hanna. "They're are a lot of really interesting people and I'm interested in hearing from everybody."

The first presidential nominating contests aren't until February of 2020 but those at the event are ready to support whomever becomes the nominee.

"Change really doesn't take place in Washington or Capitol Hill, change really takes place from the bottom up," said Jeremiah Lowery, a member of the Sierra Club's Washington, D.C. chapter. "Regardless of which candidate gets in office we're going to really need a movement on the ground amongst advocates and community members to really push one of those candidates who gets elected to actually implement a $15 minimum wage. So I think that's how it's going to be done, it's going to be done through a grassroots movement."