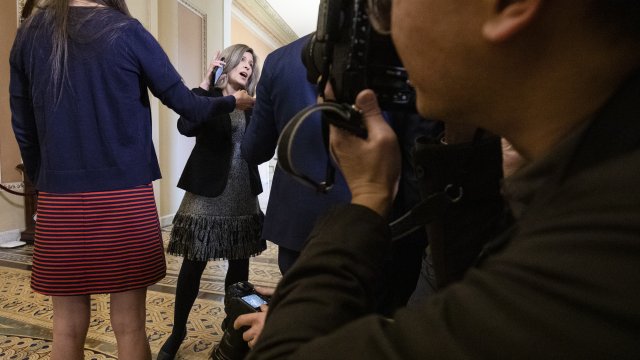 SMS
Dems Close Impeachment Trial With Warning To Senators
By Patrick Terpstra
By Patrick Terpstra
February 3, 2020
Rep. Adam Schiff told senators if they vote to acquit the president, "Your name will be tied to his with a cord of steel and for all of history."

They are set to vote Wednesday on whether to remove the president from office.

She and the other Democratic impeachment managers spent their two final hours on the Senate floor reviewing the evidence they say proves the president held up military aid and a White House meeting for Ukraine until it agreed to announce an investigation into political rival Joe Biden.

It was extortion, they said, pointing to witness testimony and President Trump's own words about wanting Ukraine to look into Biden and his son, Hunter, who served on the board of Ukrainian energy company Burisma.

House managers said an acquittal would threaten the integrity of the 2020 election.

"History will not be kind to Donald Trump," said lead impeachment manager Rep. Adam Schiff. "If you find that the House has proved its case and still vote to acquit, your name will be tied to his with a cord of steel and for all of history."

The president's attorneys had equal time to defend the nation's leader, who stood accused of abusing his power and obstructing Congress.

They said his actions on Ukraine were driven by legitimate policy priorities, including a genuine concern about corruption.

They pointed to previous statements by Democrats about wanting to impeach the president long before the Ukraine scandal broke out.

"They have cheapened the awesome power of impeachment, and unfortunately, of course, the country is not better for it," President Trump's personal attorney Jay Sekulow said.

President Trump will be on the other side of the Capitol on Tuesday for his State of the Union speech.

He'll speak to the entire Congress, including the hundreds of House Democrats who voted to impeach him.

The president's attorneys told senators they should be working with the president to help their constituents, not voting to impeach him.

"The president has done nothing wrong, and these types of impeachments must end," White House counsel Pat Cipollone said.

The Senate votes on the president's fate Wednesday at 4 p.m. ET.

It would take two-thirds of the Senate to convict him, requiring 20 Republicans to side with Democrats. Without a single Republican openly favoring impeachment, the vote is all but certain to end in the president being acquitted and allowed to remain in office and run for reelection.