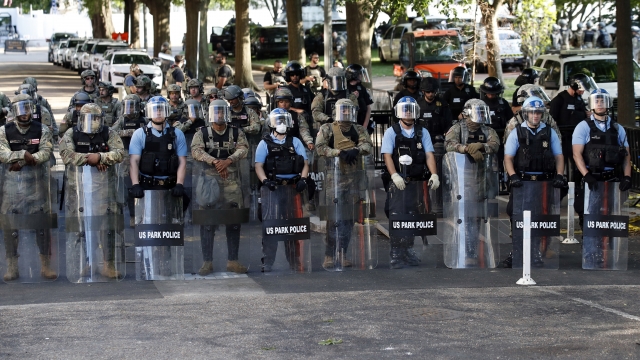 A local chapter of the Black Lives Matter movement, along with a handful of other protesters, have filed a lawsuit against the Trump administration for its forceful clearing of demonstrators from Lafayette Square on June 1.

The lawsuit cites the use of "tear gas, flash bombs and rubber bullets" to disperse those who were protesting near the White House over the death of George Floyd, so that President Trump and other administration officials could take photos outside St. John's Episcopal Church.

The lawsuit filed on Thursday states, "This case is about the President and Attorney General of the United States ordering the use of violence against peaceful demonstrators who were speaking out against discriminatory police brutality targeted at Black people."

President Trump told Fox News Radio that police did not use tear gas. But the U.S. Park Police acknowledged deploying a pepper compound, which is a form of tear gas.

Demonstrators say many protesters were injured, some of which severely, in what was a peaceful protest. However, the Park Police argued that actions were necessary to "curtail the violence that was underway."

The administration's actions have been sharply criticized by various military officials, including former Defense Secretary Jim Mattis, in recent days. Mattis accused the president of actively trying to divide the American public.