Demonstrators In U.S. Call For Safety Of Ukrainian Children 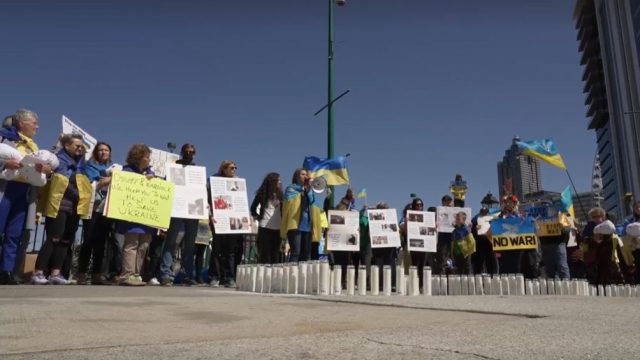 SMS
Demonstrators In U.S. Call For Safety Of Ukrainian Children
By Maura Sirianni
By Maura Sirianni
March 26, 2022
The word "KIDS" was spelled out in candles, remembering those innocent young lives lost to senseless violence.

"I can't believe a girl, 6-years-old, was walking with her mother and with her brother and the Russians just killed this family," said Kyiv native Olga Gorman.

Gorman moved to America six months ago with her husband, and says, her brother back in Ukraine tells her the situation on the ground is growing more desperate by the day.

"These people are just so tired. Yesterday when he delivered food, people started fighting with each other over a piece of bread," said Gorman.

In Atlanta, members of "March for Ukrainian Mothers" and "Save the Children of Ukraine" held a demonstration.

The word "kids" spelled out in candles, remembering those innocent young lives lost to senseless violence. 11-year-old Ilona Gavryliv joined the rally with her father, a Ukraine native.

"It's really hard to see my parents going through this stuff at home because we have family there [in Ukraine], and just seeing these innocent kids and people dying because of these bombs coming into their territory, and all they're trying to do is lead a peaceful life," said Gavryliv.

Last week, Ukrainian authorities said Russian soldiers bombed a school sheltering 400 people in Mariupol. The human cost of war is mounting, but some of the most distressing stories have been those involving children.

At least 136 kids have been killed since the start of Russia's invasion, at least 64 of those killed were in Kyiv.

Demonstrators held signs with images of some those children.

"The Russian invasion, it's a terrorist attack on the whole country. There are 45 million people in there. There is no reason, and we demand a stop to it," said Ukrainian American Inna Serbina.

"People are suffering without water, without electricity, without anything," said Max Poliashenko.

Ukrainian Americans say they will continue to gather and rally, and urge the U.S. government to send money, accept refugees, and help put an end to the devastation.

Demonstrators also urged for a "no-fly zone" over Ukraine.