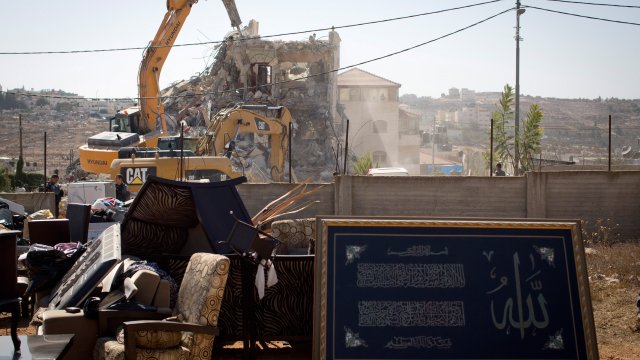 This is an apartment building being blown up in the West Bank by an Israeli explosives team.

On Friday Mahmoud Abbas, the leader of the Palestinian Authority, said he is suspending all agreements signed with Israel in protest.

Israel said it was demolishing structures that were largely under construction near the barrier because the Israeli Supreme Court ruled they violated a building ban for the area.

But Abbas called the destruction "ethnic cleansing." And in a speech in Ramallah, he announced a decision to QUOTE "stop implementing the agreements signed with the Israeli side."

He said: "We will not bow to dictates and imposing a fait accompli by force in Jerusalem and elsewhere."

Israel has conducted similar demolitions before, such as these structures leveled in East Jerusalem in 2013 and other razing of buildings along the West Bank barrier in 2009. Abbas has also previously threatened to annul agreements with Israel.

It is uncertain how the latest Palestinian reaction may affect foundations of the 1993 Oslo Peace Accords. They established a basis for Palestinian self-rule in the occupied West Bank, East Jerusalem and Gaza Strip, including Palestinian recognition of Israel. For its part, Israel has previously warned that ending the agreements could spell the end of the Palestinian Authority.