Democrats Won The House On Health Care. What Happens Now? 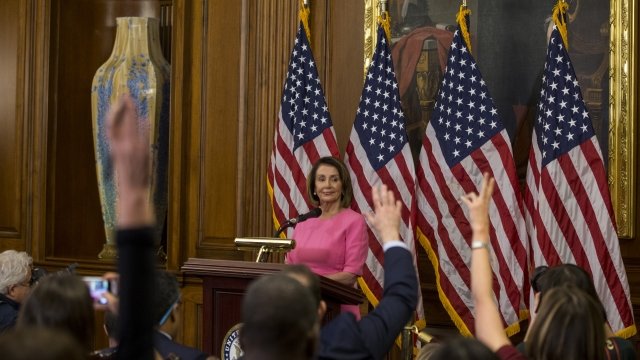 By Kellan Howell
November 13, 2018
The issue of health care propelled Democrats to the House majority, but what happens now?
SHOW TRANSCRIPT

Forty-one percent of voters said health care was their top concern when casting their votes in the midterm elections, according to preliminary exit polls. That made it the No. 1 issue in the election, and it helped flip the House for Democrats. So what happens now?

"I think people are requiring their elected officials to have some viable policy solutions to health care challenges," said Ryan Collins, director of government affairs at the Center for American Progress, a progressive think tank. "I think the two that we are again kind of running into are the exceedingly high cost of prescription drugs, health care affordability in the insurance market continues to be a plague and a hard thing for families to deal with."

Republicans still have control over the White House and the Senate. So getting health care legislation passed won't be easy.

"We'll most likely see two years of gridlock, unfortunately, because there are still pretty big differences on how we want to answer that question," said Marie Fishpaw, director of domestic policy studies at The Heritage Foundation, a conservative think thank. "But the biggest thing will be that Democrats will have a platform to push for their ideas for bigger government expansion, and Republicans are going to have to come up with an answer for that."

Stabilizing Obamacare is likely going to be the first item on the agenda, and that could cause some controversy.

While Republicans haven't outright repealed the Affordable Care Act, they have taken some steps to dismantle key parts of it. The GOP tax bill removed the requirement that all Americans buy insurance, known as the individual mandate, and President Donald Trump issued executive orders to allow insurers to sell some plans that don't have to meet the law's health coverage requirements for people with pre-existing conditions like asthma, cancer or depression.

Now Trump's actions could wind up in the crosshairs of the House oversight committee, which Democrats won control of when they took the House.

"I think this is particularly important on the investigative side of the ledger with Democrats wanting to know a little bit more about what the administration has been doing on short-term plans, those association health plans which, in certain marketplaces, do gut those pre-existing condition efforts," Collins said.

And some Republicans say those investigations could open the door to more compromise in Congress when it comes to dealing with expensive health care costs.

There is one area where liberal experts say Democrats and Republicans may be able to find a bipartisan legislative solution: prescription drug pricing.

"You look at poll after poll, pharma is the best boogeyman that anybody wants to hit against. So I think you’ll see a lot of legislation on that. … I think it’s an area the Democrats can really make an issue out of for themselves," Collins said.

But some experts say that just because both Democrats and Republicans want to deal with the issue it doesn't mean the will be able to agree on the solution, and that could mean a long battle ahead.

"We agree that health care costs are too high. We agree that people who are vulnerable, such as those with pre-existing conditions, need to be able to access care," Fishpaw said. "What we disagree on is the role of government in delivering those solutions, and that's so far a pretty stark divide that will be difficult to surmount."