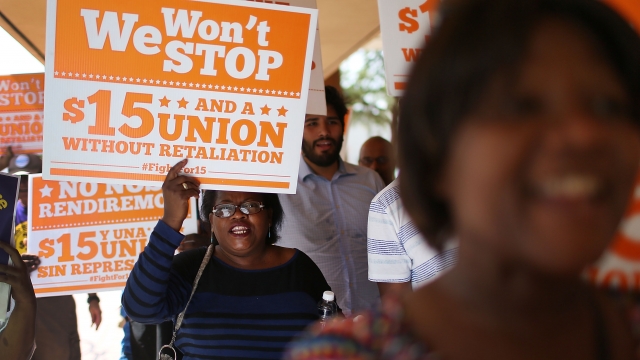 As Democrats meet and set their policy agendas ahead of the Democratic National Convention later this month, that's a pretty significant shift for Hillary Clinton.

The presumptive Democratic presidential nominee's previous stance was for a $12 minimum wage.

In the platform amendment Friday, Democrats praised the movement to gradually increase minimum wages in New York and California — a movement Sanders made a hallmark of his presidential run.

"We've got to end the starvation minimum wage of $7.25 and raise it to $15," he said during a debate with Clinton in April.

"If somebody works 40 hours a week in the United States of America, that person should not be living in poverty," Sanders told Iowa Public Television in September. "That's what a $15 minimum wage would do."

But shortly after the minimum wage proposal sailed through unchallenged, two other Sanders-backed amendments to expand Social Security got shot down. So while Clinton and Sanders are negotiating, they're not entirely on the same page.

Speculation is growing Sanders will endorse Clinton soon, possibly as soon as this coming week.