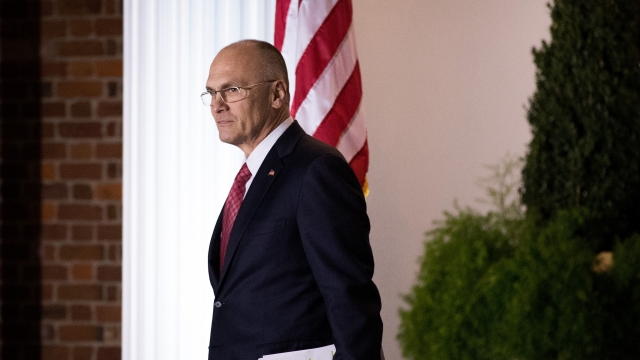 SMS
Unable To Block Him, Democrats Want Labor Nominee Puzder To Withdraw
By Grant Suneson
By Grant Suneson
February 9, 2017
Senate Democrats promised to fight Andrew Puzder's labor secretary nomination, but there's not much they can do.
SHOW TRANSCRIPT

So now they're turning their attention to Labor Secretary nominee Andrew Puzder.

"They ought to withdraw Puzder's nominee before he further embarrasses this administration," Sen. Chuck Schumer said.

Puzder has been accused of being anti-labor. He strongly opposes minimum wage increases and the Affordable Care Act, which forces more companies to provide their employees with health insurance.

Puzder also has some skeletons in his closet. He caught flak for employing an undocumented immigrant as a housekeeper and only paid the back taxes for that after he was nominated.

Puzder's ex-wife also said he assaulted her during their marriage, but she has since retracted those accusations.

But reports suggest the biggest reason his nomination hearing has been rescheduled four times is because he's struggling to divest from his businesses.

Puzder owns CKE, which is the parent company of fast food franchises like Hardee's and Carl's Jr.

But there's no reason to think that any of that will stop him from being confirmed. Even though the vote on DeVos came down to a tiebreaker from the vice president, it probably wasn't in jeopardy of failing thanks to Senate Majority Leader Mitch McConnell.

The Washington Post wrote: "McConnell knew he could afford to lose two Republican votes. … He signaled to Collins and Murkowski that they were absolutely fine to break with their conference on DeVos, knowing it would help them politically."

Senate Democrats have promised to thoroughly scrutinize Puzder's record during his confirmation hearings, but Trump's past nominees have shown Democrats just don't have the numbers to block him.