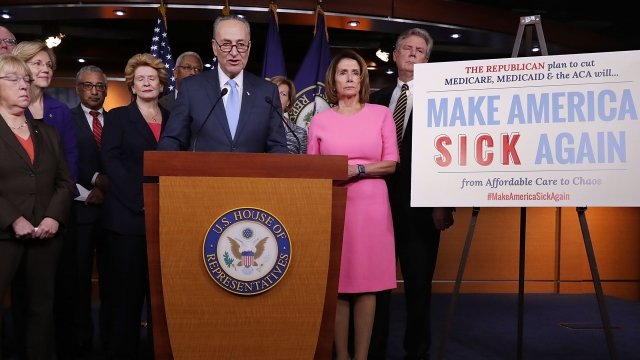 Democrats have been looking for a unifying theme for the 2018 midterms, and it looks like they've zeroed in on the most obvious choice: health care. More specifically, attacking Republicans for trying to kill Obamacare again ... and again.

And with the GOP signaling it's ready to try to repeal and replace at the beginning of an election year, Democrats are ready to use any failures as ammo to, at the very least, take back the House and put up a big fight for Senate seats.

Sen. Brian Schatz from Hawaii put it this way, "Everybody, from the most progressive to the most moderate, would be glad to vote to retain the progress we've made on health care and to prevent people's lives from being thrown into chaos."

And politically, it's probably a pretty smart move. Obamacare has become more popular as the possibility of a repeal has become more of a reality. And every iteration of a GOP-lead health care bill this year has been met with low popularity and approval numbers.

Obamacare is going to be a top issue for voters next year — no matter what side they're on. And Republicans could get hit from both ends: from uber-conservative primary challengers who wanted Obamacare gone yesterday, and from Democrats rallying behind the law in the general election.

So not only is the failure of repealing going to be a problem for the GOP, but if it's successful and millions lose health care, that's going to continue to galvanize an already pumped up progressive left.

There are 23 Republican districts that Hillary Clinton beat Donald Trump in last year; Dems just need 24 to take over the House.