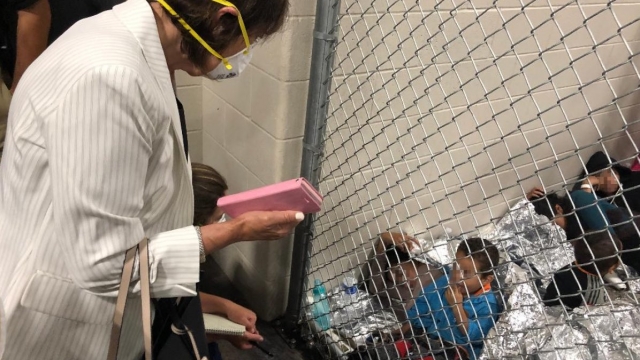 U.S. Rep. Jackie Speier said at a press conference after the visit, "We saw what was a situation where adult men were housed in cells that would normally accommodate five or six and there might've been 40 in those cells."

The Democrats said the conditions were 'inhumane.' One representative tweeted video from a facility where migrants told him they hadn't showered in 40 days, that the lights are kept on at night and they've gone hungry.

The migrant told lawmakers, "40 days here. We haven't taken a shower for 40 days."

The Democrats' reports echoed what journalists had seen the day before. The Washington Post said there were around 400 men crammed into cells. Journalists reported that migrant men screamed at them, also saying they'd been held there for at least 40 days without being allowed to shower or brush their teeth.

The patrol agent in charge disputed those claims. Pence said he wasn't surprised to see "a system that was overwhelmed."

Pence told CNN, "Last month alone nearly one hundred thousand people coming across our border, individuals being apprehended, families that are presenting, making an asylum claim and some that aren't. But what you saw today firsthand was the overcrowding that we knew that we would see."

Meanwhile, Pence visited a different detention center for families that had more room and was air-conditioned. Migrants rested on cots, watched movies and ate snacks.

Pence asked migrant children, "Are they taking good care of you here?" The children responded, "Sí."

Pence said after his tour, "Every family I spoke to said they were being well cared for, and that's different than some of the harsh rhetoric we hear from Capitol Hill."