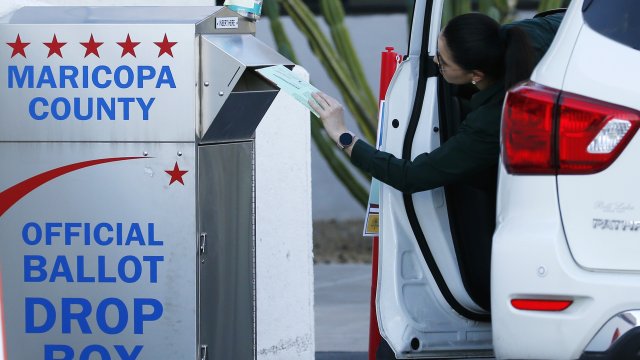 In light of the coronavirus, primary elections are virtually on hold. Red states and blue states are postponing voting, many until June. The hope is by then it will be safe enough for people to get to the polls to cast their ballots.

Some think Americans should be voting a different way entirely, regardless of when this virus lets up. They say it's a way that would keep the election schedule intact.

"It's not the first thing on everyone's mind right now. But a few of us have to start thinking the long haul for our very democracy," said Sen. Amy Klobuchar.

Klobuchar, along with Sen. Ron Wyden, are hoping to retool the voting process by allowing no-excuse-needed absentee vote-by-mail in all 50 states and expand early in-person voting. Voters would be able to use printable ballots and states would be required to provide prepaid, self-sealing envelopes with a barcode.

According to the National Conference on State Legislatures, just five states conduct all elections by mail. A handful of other states allow some to vote by mail under certain circumstances, and more than a dozen states require an excuse, like a disability or religious observance, to vote by mail. Those who argue against mail-in voting say it exposes elections to fraud and coercion away from the eyes of on-site poll watchers.

Klobuchar and Wyden asked for $2 billion to implement their strategy in the third coronavirus stimulus bill. They got $400 million. She says it's a start, but so far, the support has only come from one side of the aisle. More than a dozen Democratic senators, including current and former presidential candidates Bernie Sanders, Kamala Harris and Cory Booker, are cosponsoring the bill.

Republican members of Congress are open to giving federal dollars to modernize elections but oppose federal mandates on mail-in voting. They say making changes to the elections process should be a state decision. Klobuchar says she's seen signals of support from Republican secretaries of state.

With President Donald Trump extending social distancing guidelines for at least another month, it's not just the primaries Klobuchar says officials need to be concerned about. In addition to the presidential race, there are 11 governorships,  35 Senate seats and every single House seat up for grabs.