Democrats And Republicans Split On How To Respond To Iran Intel 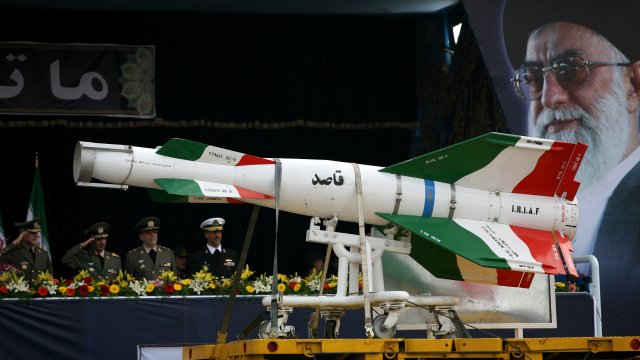 The White House is escalating warnings about Iran. It's accusing the country of encouraging its proxies to target U.S. troops, loading missiles on to ships, launching a missile into Iraq’s Green Zone, sabotaging vessels in the Gulf of Oman; actions forcing some U.S. personnel out of the embassy in Iraq. But whether that intelligence is accurate, and what to do about it, is in question.

"What we've had is the initial intelligence warning. The Trump administration responded by deploying additional combat power," said Bradley Bowman, a combat veteran who worked for years on the Senate Foreign Relations Committee. He says this is not a step toward war.

"The deployment is not a provocation. This is a common and prudent strep that administrations do all the time," Bowman said.

After a congressional briefing last week, and ahead of another on Tuesday, Democrats and Republicans seem far apart on what to do next.

"There's elements of wisdom on both sides of the debate," Bowman said. "The degree that folks on the left are saying we shouldn't rush to war with Iran, I agree. To the degree that people on the right are saying that if you respond weakly to Iran you're going to get more aggression as well. I think you can hold these two ideas at the same time and act accordingly."

Sen. Lindsey Graham echoed the president's warnings over the weekend, saying in part, "If the Iranian threats against American personnel and interests are activated, we must deliver overwhelming military response."

But Democrats have a different feeling. Delaware Democrat Sen. Chris Coons said, "If we were to get drawn into a war with Iran, the consequences for our global position would be, I think, tragic."

As the president weighs a military response, Bowman says any escalation should be approved by Congress through a new Authorized Use of Military force or AUMF. "The current AUMF is nearly two decades old and was written in the aftermath of the 9/11 attacks."

"The 2001 AUMF would not provide authority for action against Iran," Bowman said. "There's no question. Congress has neglected to fulfill that constitutional responsibility, and I don't think thats a good thing."

The president says he hopes this increased pressure on Iran will bring leaders back to the negotiating table.