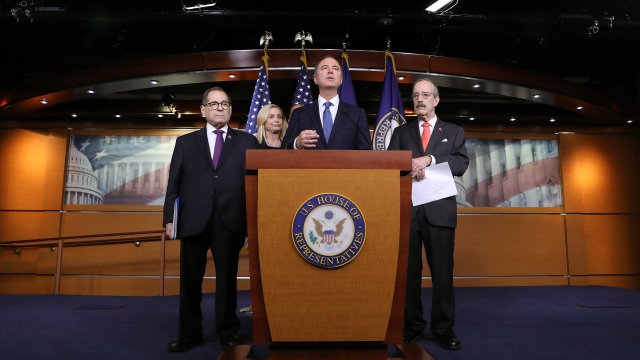 SMS
Dems Release More Transcripts From Closed-Door Impeachment Hearings
By LeeAnne Lowry
By LeeAnne Lowry
November 27, 2019
Both men who testified complied with subpoenas, even though the White House pushed them not to.
SHOW TRANSCRIPT

House Democrats have released another set of transcripts from closed-door impeachment hearings.

The hearings were with Philip Reeker, the acting assistant secretary of State in charge of European and Eurasian Affairs; and Mark Sandy, a career staffer at the Office of Management and Budget. Both men complied with subpoenas, even though the White House pushed them not to.

The chairs of three House committees said in a statement Tuesday that these new testimonies "continue to paint a portrait of hand-picked political appointees corrupting the official levers of U.S. government power, including by withholding taxpayer funded military assistance to Ukraine, to further the President's own personal political agenda."

Much of the attention has been on the transcript of Sandy's testimony, which largely revolves around concerns budget office officials had about withholding assistance from Ukraine.

The House Intelligence Committee plans to work through Thanksgiving recess to compile a report to help the House Judiciary Committee decide whether to draft articles of impeachment.