Democrats Might Use Reconciliation To Pass COVID-19 Relief Bill 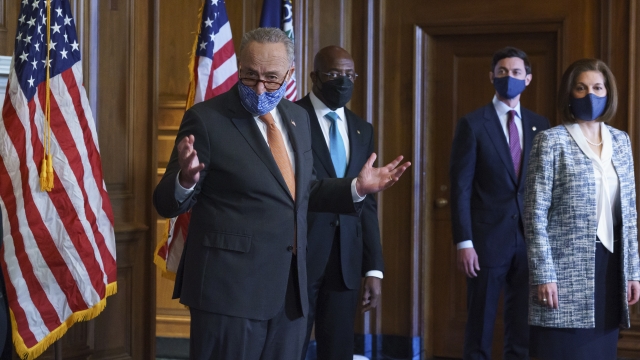 "We will pass a reconciliation bill if we need it," said Speaker of the House Nancy Pelosi.

Reconciliation is the latest "it" word on Capitol Hill. That's because it may be the best shot Democrats have at passing President Joe Biden's COVID-19 relief plan.

Reconciliation is a special procedure that allows bills to pass the Senate with a simple majority, and it was designed to be used for the annual budget.

"Congress begins with a budget reconciliation bill that sets out kind of the spending targets. It's a chance to take what are their spending priorities, and then say, 'What needs to change in current law to kind of fit within that framework?'" said Laurel Harbridge-Yong, an associate professor of political science and faculty fellow at Northwestern University.

It's a way to bypass the 60 votes need to overcome a filibuster.

"Over time, obviously, strategic politicians recognized that this was a great way to avoid the supermajority requirement," said Harbridge-Yong.

The reconciliation process was used most recently to pass the Trump administration's 2017 tax cuts. It was also used to pass the Affordable Care Act in 2010 under President Obama.

"It is not designed necessarily do any of these things. It's supposed to be part of passing a budget for the country in normal order. However, the rules can be shoehorned to pass these types of big one time bills," said Adam Michel, a senior policy analyst at the Heritage Foundation.

There are restrictions on what can be passed using this procedure. Reconciliation bills can only change policies that affect government spending or government revenue, and they must be deficit neutral over 10 years.

"We saw this in the 2017 tax bill. Republicans had to make big pieces of it temporary in order to get around that rule that says you can't be making big changes to the deficit outside of the budget window," said Michel.

Looking at President Biden's COVID-19 relief proposal, many elements do fit the definition of government spending — direct payments to Americans, buying and distributing vaccines, and paying for contact tracers, for example. But some Republicans in Congress say using the filibuster-proof reconciliation process does not encourage bipartisanship on Capitol Hill.

"But it certainly suggests that the Democrats would not have to move legislation as close to the preferences of the legislators in the Republican party as they would if they were passing legislation in a world where the filibuster was an option," says Harbridge-Yong.