Democrats Look Ahead On Impeachment: 'We Have To Move Fast' 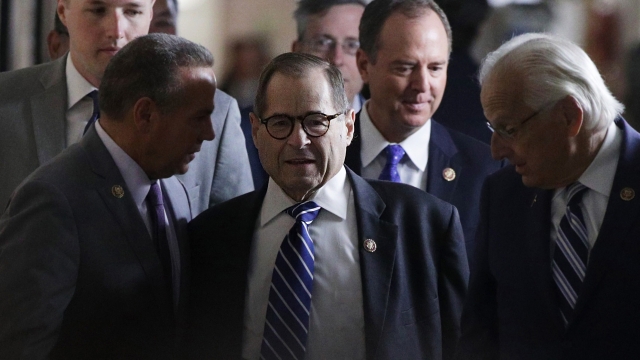 Democrats have opened a formal impeachment inquiry into the president of the United States. But the reality is they've been investigating President Trump for months now — on six different House committees. So what changes now?

On the surface, it's not much. Opening a formal impeachment inquiry doesn't grant House Democrats powers to do anything more than they've already been doing. But these investigations will take on added weight. And if the investigations determine there are reasons for impeachment, it gets referred to the Judiciary Committee, which draws up articles of impeachment. The committee votes. Then, the full House will vote on those articles of impeachment. Rep. Eric Swalwell says the notes from Ukrainian President Zelensky are enough to call that vote.

One House Republican source told Newsy they aren't worried about the speaker opening a formal inquiry. They don't see any real difference between how Democrats will work going forward and how they have been operating.

What's different is politics. For months, Democrats have struggled to get on the same page. Now they are working around one united message, with more than 200 House Democrats backing this inquiry. Democratic sources have told Newsy they believe the Ukraine issue is precise and an issue Americans can easily understand. Judiciary Committee Chairman Jerry Nadler told Newsy it's "full speed ahead." Democrats say intend to finish their inquiry by the end of the year.

"We have to move fast. We have an election coming up, Iowa caucuses aren't too far away, and we can’t have the same mess we had in 2016."

Ahead on Thursday the House intelligence committee is calling the director of national intelligence to testify. Democrats are looking to probe more about the call and any other actions the president may have taken toward Ukraine. After all, the whistleblower complaint that sparked all of this reportedly referred to multiple instances of concern, not just one.