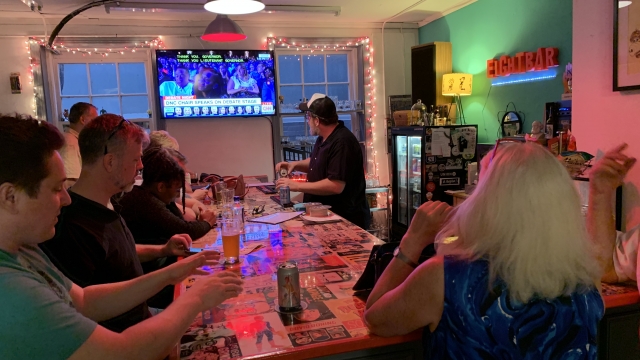 Baltimore has been the target of a political firestorm ignited by President Donald Trump's recent tweets. And Democratic voters watching the second presidential debate here told us the country needs a leader who they say represents the changing demographics in the U.S. population.

This eclectic independent bookstore has hosted debate watch parties in the past couple of years. Ray, like many who were at the party lean progressive. He's leaning towards supporting Elizabeth Warren, despite previously supporting Bernie Sanders.

"I like Bernie Sanders [but] I can't see voting for him anymore," Ray said. " I think his time [has] passed but those are the two that I like the most. I'm Kamala Harris curious at this point strictly because I'd really like to see her debate Trump on a stage. I have a feeling she would just dismantle Trump.

I think everybody has sort of taken note from the previous debate and sort of adjusted and certain people have over adjusted," said Rachel Rose. like [Joe Biden] has certainly over adjusted but I think that de Blasio is really starting to refine himself and seems to be the clear standout from the debate tonight."

"This is the first time in my life I've heard people say the things that I've wanted to hear them say even in Democratic primaries," said Pat Smith. "This is an important time. This is a time we need to win and I think we have an awful lot of people and a lot of momentum on our side."

Many are optimistic about the prospect of change but there's still a sense of doubt that things will remain the same.

So far, only a handful of candidates have qualified for the third round of debates set to take place next month in Houston, Texas.