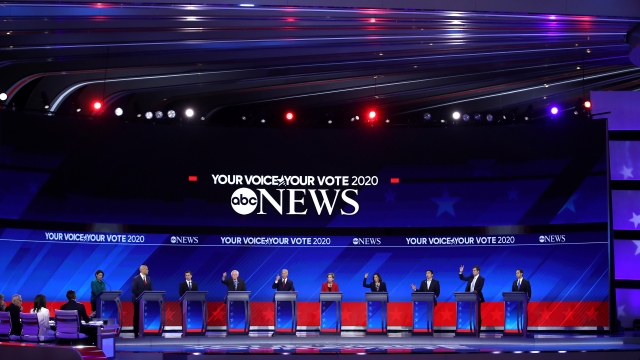 Health care, immigration, and criminal justice reform were just a few of the topics covered during the three-hour debate.

In the DNC's third round of debates, 10 Democratic presidential candidates took the stage in Houston to debate the key issues of the 2020 election.

The evening started with one of the most contentious issues — health care. The candidates all fit into two basic camps: those who want Medicare for All and those who want to leave private insurance in the mix.

"We take a version of Medicare and we make it available for the American people, and if we're right as progressives that that public alternative is better, then the American people will figure that out for themselves," Buttigieg said.

"So if you want comprehensive health care, freedom of choice regarding doctor or hospital ... moving to Medicare for All is the way to go," Sanders said.

And while the candidates all agreed the goal is to make sure more people are covered, the different ways to make that happen led to some mudslinging.

"You said they would have to buy in. Are you forgetting what you said two minutes ago? ... I'm fulfilling the legacy of Barack Obama, and you're not," Castro said

"That'll be a surprise to him," Biden said.

"And while Bernie wrote the bill, I read the bill. ... That means that 149 million Americans will no longer be able to have their current insurance. That's in four years. I don't think that's a bold idea. I think it's a bad idea," Klobuchar said.

The debate covered a wide range of issues. On education, the candidates were pretty unified in calling for paying our teachers more. On gun control, they talked about getting assault weapons off the streets, but candidates differed on whether the government should make a gun buyback program mandatory or voluntary.

"Are you proposing taking away their guns? And how would this work?" moderator David Muir asked.

"I am, if it's a weapon that was designed to kill people on a battlefield. ... in Odessa, in Midland that there weren't enough ambulances to get to them in time. Hell yes, we're going to take your AR-15, your AK-47," O'Rourke said.

The moderators also asked about China and what they would do to end the current trade war.

Arguably a highly-anticipated moment came in the opening statements. Ahead of the debate, Yang, the only non-politician on stage, had promised to do something no other presidential candidate had done before.

"My campaign will now give a freedom dividend of $1,000 a month for an entire year to 10 American families, someone watching this at home right now. If you believe you can solve your own problems better than any politician, go to Yang2020.com and tell us how $1,000 a month will help you do just that,"

The next debate is gonna happen in October, and while the rules to qualify are the same, we're going to see more people in the field.

The candidates who didn't qualify for the ABC News debate have more time to meet the polling and donor minimums before the October deadline, and billionaire Tom Steyer has already done that.