Here's What To Watch For During The October Democratic Debate 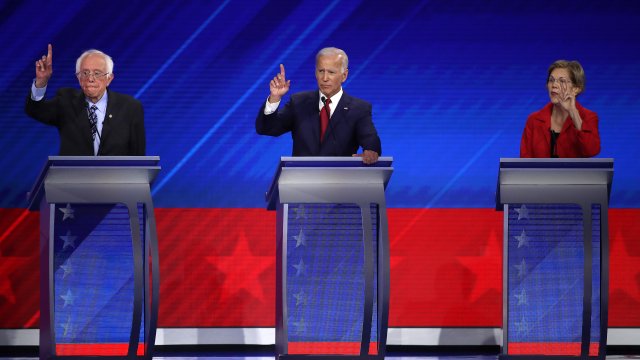 The stage is set for what will be the most crowded Democratic presidential debate of the primary. Impeachment will be top of mind for the 12 candidates expected to take the stage -- This is the first debate to take place after the House of Representatives launched an impeachment inquiry into President Trump, something all the participating candidates support.

Only two of the previous five nights of debates have touched on impeachment, mostly in the context of the Mueller report. This time President Donald Trump's call with Ukraine's president and willingness to encourage foreign governments to investigate a political opponent could be the leading issue.

There is also likely to be a robust discussion on foreign policy after President Trump cut ties with pro-U.S. Kurdish forces in Syria. It will be Senator Elizabeth Warren's first time on stage as a solidified top-tier candidate, and rivals are likely to try to put her on the defensive as a front runner.

Standing next to her will be former Vice President Joe Biden, who is now fighting off attacks from both Democratic opponents and President Trump. The president and his allies have taken Biden to task for his son Hunter Biden's business dealings with a Ukrainian energy company.

Biden says: "And I'll put my integrity of my whole career of public service in this nation up against his long record of lying cheating and stealing any day of the week."

Flanking the front runners will be Senators Cory Booker, Kamala Harris and Bernie Sanders, who is still in recovery after a heart attack on the campaign trail, his campaign has confirmed he will be at the event.

On the other side are Mayor Pete Buttigieg, Andrew Yang and former Rep. Beto O'Rourke.

The debate will be held at Otterbein University in Westerville, Ohio, and starts on Tuesday 8pm ET on CNN.