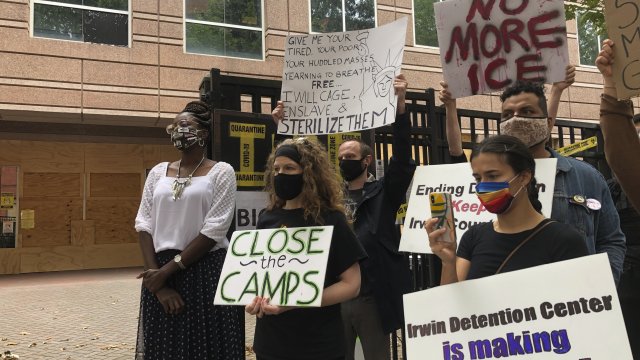 SMS
Dems Call For Investigation Into Reports Of Forced Medical Procedures
By Newsy Staff
By Newsy Staff
September 16, 2020
A whistleblower nurse claims that a high rate of hysterectomies have been performed on women detained at a privately-owned immigrant jail in Georgia.
SHOW TRANSCRIPT

Democratic lawmakers are calling for an investigation into claims that a high rate of immigrant women held at a detention center in Georgia underwent hysterectomies, some against their will.

A nurse who worked at the Irwin County Detention Center filed a complaint that also accused the center of not testing people for COVID-19 and destroying medical records.

"Americans need to know what happened to women and girls in these detention facilities and if verified, who was responsible for pushing these invasive medical procedures. And if these horrific reports are true, we as a nation have an obligation to bring those responsible for this unquestionable violation of human rights to justice," said Majority Leader Chuck Schumer.

The U.S. Immigration and Customs Enforcement's medical director denied the claims of "mass hysterectomies" and said only two women have been referred for hysterectomies from the facility in the past couple of years. He said: "Detainees are afforded informed consent, and a medical procedure like a hysterectomy would never be performed against a detainee's will."