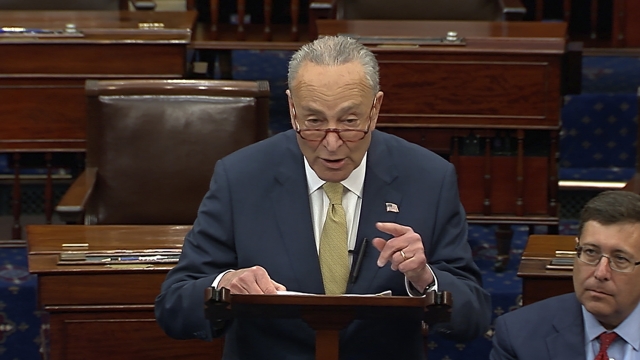 With hearts in Uvalde, Texas, eyes are on Washington.

"We need to move forward as quickly as possible to put people on the record," Sen. Richard Blumenthal said.

Lots of talk on Capitol Hill about legislation but even before any voting happens, the outlook on real change is bleak.

The most likely focus is background checks for transfers between private parties and a bill that would close the "Charleston loophole." Right now, a person can get a gun three business days after purchase, even if a background check hasn't been completed.

"There is a plague, a plague upon this nation. A plague of gun violence that has taken over this country," Schumer said.

The anger among Democratic voters isn't just with Republicans. It's also with their own party, which controls both houses in Congress and the White House. It's unclear if Democrats would be able to lock up every vote within their own party in the Senate to support the bills. Sen. Joe Manchin has opposed both in the past and is not willing to end the filibuster for this issue.

"A filibuster should not be needed," he said. "It's the one tool that keeps us working and at least talking together."

And, there's not much President Joe Biden can do without Congress.

His nominee to lead the Bureau of Alcohol, Tobacco, Firearms and Explosives — Steven Dettelbach — was in the hot seat Wednesday for his confirmation hearing after President Biden's previous pick, an outspoken gun reform advocate, fell apart. Dettelbach would be responsible for curbing the illegal use of firearms, enforcing federal laws and issuing licenses.

Any executive order President Biden would sign would likely be challenged in court and would face a tough 6-3 conservative bench on the Supreme Court if it made it that far.

In fact, in the next few weeks, the nation's highest court is primed to roll back a concealed carry law in New York that says a person needs a reason to have a permit.

It's the first time the Court took up a gun rights case in more than a decade and in the modern era has really only ruled that Americans have a right to bear arms in their homes. The Court took up the case shortly after Justice Amy Coney Barrett's confirmation gave them the solid majority.

"That does give you yet another indication of how the court is becoming more conservative," Howe continued. "If they were to strike down this law, but not say a lot more about the Second Amendment right to carry a gun outside of your home, you would expect in other laws, you would expect challengers to other perhaps gun restrictions to follow."

This ruling could impact nearly a dozen states with concealed carry laws on the books.