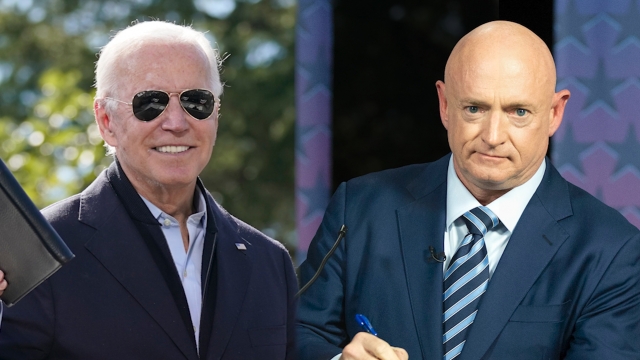 “If you would've said out loud three years ago to anybody here in Arizona, hey I think we’re going to have two Democratic senators representing us here … three years from now, they would’ve sent you off to the looney bin,” Noble said, sitting in his largely empty office in North Central Phoenix.

“I’d say the polling we have right now is not only the best we’ve ever seen, [but] we’ve seen more polling than we’ve ever seen before here in the Grand Canyon State,” he added.

Noble’s polling shows an advantage to Democrats in the state’s presidential and senate races — with the latest polls showing Democratic senate candidate Mark Kelly with a clear edge on Republican incumbent Sen. Martha McSally, and a slight advantage to Joe Biden over President Trump.

According to Noble, key to that expansion are white female suburban voters who dislike the president, and a strong showing for Democrats in Maricopa County, home to Arizona's largest city, Phoenix.

“If you lose Maricopa County by a couple points or more, your path to victory becomes very untenable,” Noble said.

“A lot of early ballots have come in already,” pointed out Garrett Archer, a data analyst for Newsy sister station ABC15 Arizona in Phoenix.

“Almost 800,000 and the majority of those are Democrats, and that is uncharacteristic of Arizona for the most part.”

Prior to television, Archer — nicknamed the ‘AZ Data Guru’ — worked in the Arizona Secretary of State’s office as a senior data analyst tasked with analyzing the early vote and voter registration trends across the state.

He told Newsy the state has recently seen an influx of California families moving to the state’s suburban areas, drawn here by the lower cost of living and growing tech sector.

But another demographic shift that favors Democrats is a growing Hispanic and Latino population in Maricopa County.

“This is a district that you move to largely because either you're an immigrant to this country or the state and you're starting new and you bought your first home,” Rep. Ruben Gallego (D-Arizona) told Newsy in a park across from his South Phoenix home.

Gallego represents Arizona's 7th congressional district, which is 64% Hispanic and reliably Democratic. Gallego's last election sent him back to Washington with nearly 86% of his district’s vote.

"I think Arizona was always trending blue,” Gallego said. “I think the days of Republican domination in Arizona are going away.”

“This election is definitely a referendum on Donald Trump,” Archer said. “All of the other candidates down-ballot are feeling that.”

But even if President Trump wins the state in 2020, changing demographics may continue to favor Democrats.

“I think [Arizona] will absolutely continue its role as a swing state probability for the next decade or so to come,” Noble said.