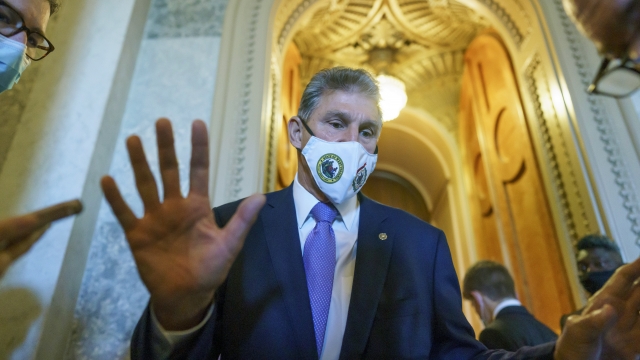 SMS
Democrats At Odds Over $3.5T Reconciliation Bill
By Newsy Staff
By Newsy Staff
September 30, 2021
All eyes are on Sens. Joe Manchin of West Virginia and Kyrsten Sinema of Arizona, who have indicated they would vote against the bill.
SHOW TRANSCRIPT

Democrats are at odds over President Biden's $3.5 trillion budget plan that would expand government health care, education and other programs.

All eyes are on Sens. Joe Manchin of West Virginia and Kyrsten Sinema of Arizona — two centrist Democrats who have indicated they would vote against the bill.

Manchin said Thursday the price tag is too high — by at least $2 trillion.

"My top line has been 1.5 because I believe in my heart that what we can do and what the needs we have right now and what we can afford to do without basically changing our whole society to an entitlement mentality," he said.

Meanwhile, progressives are threatening to derail a vote on a bipartisan infrastructure bill, saying it's useless without the bigger reconciliation package.

"I don't have an offer in front of me," she said. "My number is 3.5, our number is 3.5, somebody has a different offer then they can put it on the table. You don't negotiate against yourself. If you go to buy a house, you don't put down an offer and before an offer has even been put on the table, suddenly say, 'OK, I'm willing to go down another $100,000.' Anybody done that? I don't think so. That's not how we negotiate."

Several progressives have said they won't vote on infrastructure unless there's a deal on the bigger reconciliation package.