Democrats Are Renewing The Fight To End Trump's Travel Ban 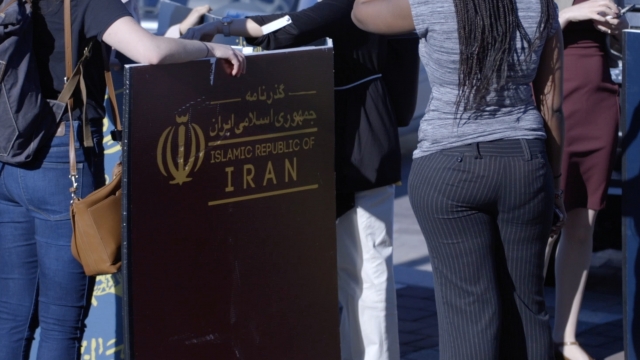 Democrats aren't just fighting President Trump's immigration policies on the southern border. They're also renewing the fight against his travel ban. Lawmakers have introduced a bill that would overturn the president's executive order denying certain travelers from seven countries, five of which are Muslim-majority nations, from entering the U.S.

Rep. Judy Chu, who is leading the bill through the House, says the bill will repeal all three iterations of the ban and the asylum ban, end extreme vetting, and change the laws so these types of orders can't happen again. It would add religious protections to the Immigration and Nationality Act's nondiscrimination clause and add strict restrictions should anyone be barred.

The number of refugee admissions is at an all-time low — 30,000 compared to the 110,000 admitted in 2016. Rabbi Jonah Pesner, head of the Religious Action Center, reminded a crowd Wednesday morning that this could happen to any race or faith in the future.

While the lower courts did initially oppose the president's travel order, the administration's case eventually made it to the Supreme Court. Just last year, a majority of justices upheld the president's executive order.

Every Democratic senator running for president in 2020 is also supporting the bill, but the likelihood of this bill actually becoming law is not great.

"As long as we don't have Republican cosponsors, it will not get through the Senate," said Democratic Sen. Chris Coons, the lead on the Senate's version of the bill. "Given the visibility of this hateful ban in President Trump's campaign and in the first year of his administration, I am hopeful but not optimistic that we will have a number of Republican cosponsors."

After the nation's highest court ruled in their favor, the Trump administration said, "In this era of worldwide terrorism and extremist movements bent on harming innocent civilians, we must properly vet those coming into our country."

Congresswoman Chu says the House Judiciary Committee will hold hearings on the legislation in June.