Trump Doesn't Back Down Amid Criticism Over His Racist Tweet 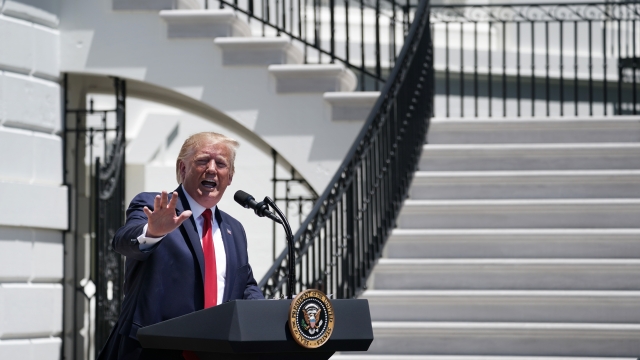 Backlash from one of President Donald Trump's tweets continued on Monday, but he hasn't backed down.

"It's behavior that's unbecoming of the president of the United States and the leader of the free world. We should talk about uniting people and not dividing us," Rep. Will Hurd said Monday.

"These are people that, in my opinion, hate our country. Now, you can say what you want. Get a list of all of the statements they've made. And all I'm saying is, if they're not happy here, they can leave," President Trump said Monday.

The racist comments were part of a three-tweet thread the president sent out Sunday. It says, in part: "So interesting to see 'Progressive' Democrat Congresswomen, who originally came from countries whose governments are a complete and total catastrophe ... now loudly and viciously telling the people of the United States ... how our government is to be run. Why don't they go back and help fix the totally broken and crime infested places from which they came."

The "go back where they came from" part of the tweet seemed to cause the most uproar. Many people noted that three of the four women were born in the U.S. The fourth, Omar, was born in Somalia, came to the U.S. as a refugee when she was about 12, and became an American citizen in 2000.

"It is absolutely racist and un-American," Sen. Kamala Harris said.

House Speaker Nancy Pelosi said "diversity is our strength" and that the president's comment was meant to divide the country. She said House Democrats are working on a resolution to condemn the president's tweet.

Republicans largely kept quiet in the immediate aftermath of the tweet. But by Monday, a growing number of GOP lawmakers had criticized the president's words, urging him to take the high road and stay away from personal attacks.

"Aim higher. ... They are American citizens. They won an election. Take on their policies," Sen. Lindsey Graham said on Fox News.

President Trump continued to criticize the "Radical Left Congresswomen" on Monday. He denied accusations that his tweet was racist and accused the *congresswomen of using "foul" and racist language.