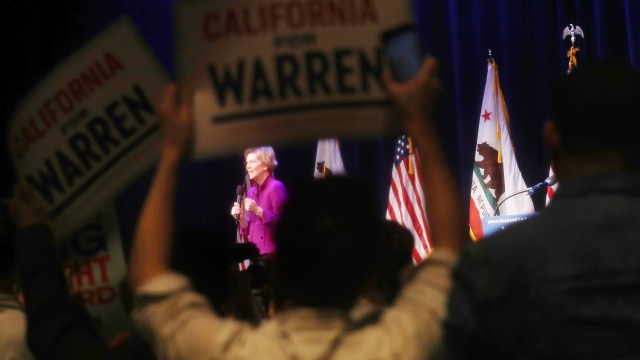 SMS
Party Leaders Urge Social Media Ceasefire for 2020 Dems
By Kellan Howell
By Kellan Howell
March 1, 2019
The 2016 election was mired by the spread of disinformation on social media, now Democratic leaders are urging 2020 candidates to call a truce.
SHOW TRANSCRIPT

Large presidential primary fields can lead to prolonged and nasty campaigns. And as the Democratic field continues to grow for 2020, party leaders are attempting to stop any foul play on social media dead in its tracks.

State Democratic party chairs from the four early caucus and primary states sent letters to party leaders across the country asking them to “work towards developing a collaborative approach to battling disinformation, illicit campaign tactics, bots, trollfarms, fake accounts, altered text, audio, and video, any and all inauthentic speech in our Presidential Primary process.”

"They’ve come out for sort of creating a disarmament pact between the Democrats or among the democrats that would have them swear off things like fake accounts and fake websites and deep fakes and hacking and the use of hacked materials to establish some new rules, post what happened in 2016," said Simon Rosenberg, president of the New Democrat Network, a progressive think tank in Washington, D.C.

The state party chairs for Iowa, New Hampshire, Nevada and South Carolina wrote that the Democratic party and presidential campaigns  quote “can and must work together in preventing the pollution of our discourse."

Rosenberg -- who ran efforts to counter disinformation for the Democratic Congressional Campaign Committee during the 2018 midterms -- says the goal is to create new ground rules for campaigns to follow when it comes to handling nefarious information on social media.

"The issue isn’t so much we’re concerned about tough ads or hard attacks, but cheating, right? And use of illicit tactics fake accounts, hacking, all the kind of things that the Russians did in 2016. We don’t want those tactics to be used by Democrats against one another," Rosenberg said.

The letter also asks candidates to commit to report any illicit content like these posts that were shared on Facebook by fake accounts, even if it helps their own campaigns.

The idea seems to be catching on. The Daily Beast reports that nearly every Democratic candidate seeking the White House in 2020 has pledged not to knowingly use hacked materials during the campaign.

But President Trump’s campaign did not make the same commitment for 2020. During the 2016 campaign, Trump frequently mentioned damning emails from the Clinton campaign and the DNC that were hacked by Russians and published on Wikileaks.

Critics worry the new pledge could hurt the eventual Democratic nominee in the general election, but Rosenberg says the pact would ultimately benefit the American people.

"The kinds of things that we’re looking at sort of explicitly forgoing are things frankly that our campaigns shouldn’t be doing anyway in the modern world," Rosenberg said. "So I don’t think its putting us at a disadvantage. Frankly, I think it’s making a value statement to the American people that we want the American people to control their discourse."