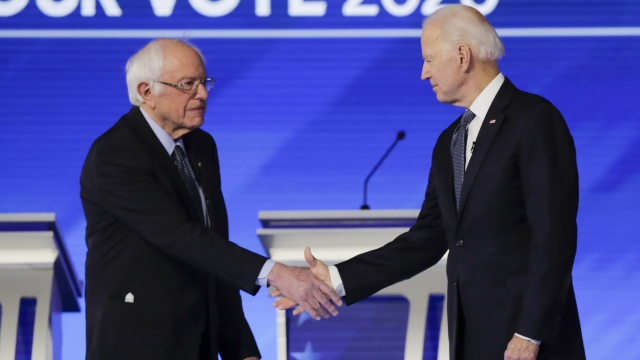 Changes to the debate because of the coronavirus could shift the tone to a more somber event, according to one political communications expert.

When Democratic presidential candidates Bernie Sanders and Joe Biden meet in Washington, D.C., for their first one-on-one matchup, the debate will be missing one thing: an audience.

As the coronavirus pandemic continues to spread, the Democratic National Committee announced Sunday’s event won’t have a live crowd “out of an abundance of caution.”

Plans for a “spin room,” the area where reporters can talk to candidates and surrogates post-debate, were also axed. These changes could all shift the tone to a more somber, serious event, according to Mitchell McKinney, director of The University of Missouri’s Political Communication Institute.

“I think the directive there is to try to provide some assurance and some hope," he said. "I expect we’ll see that with these candidates on Sunday night.”

McKinney says the impact of the coronavirus will most likely be high on the agenda for both candidates, but they are likely to focus on President Trump rather than each other.

Earlier this week, Sanders teased some of the questions he planned to ask Biden.

"Joe, what are you going to do to end the absurdity of the United States of America being the only major country on earth where health care is not a human right?" he asked.

But in a debate without the spirit of a crowd, McKinney wonders if those attacks could land more harshly. He believes Sunday’s setup favors Biden.

“He’s come across sometimes as halting, as reserved," he said. "Now, in a debate environment where there is not that crowd, that level of energy, I think this really does play to Joe Biden’s communication style.”

And as the country navigates this new normal, McKinney adds that the event could impact whether to have crowds in future debates.

The 11th debate for the 2020 Democratic primary begins at 8 p.m. Eastern Sunday.