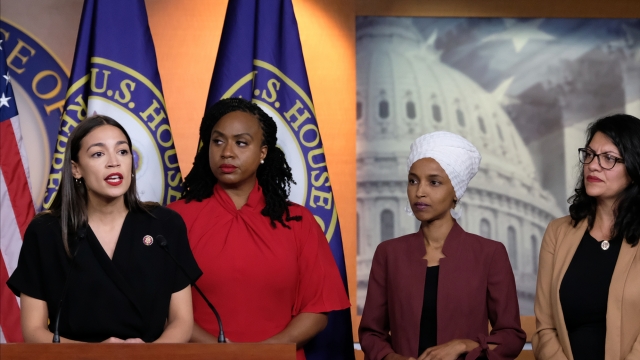 Four Democratic congresswomen believed to have been the targets of a racist tirade by President Donald Trump over the weekend held a press conference Monday to respond to his comments.

"He's launching a blatantly racist attack on four duly elected members of the United States of House of Representatives, all of whom are women of color," Rep. Ilhan Omar said.

"As we all know, the recent tweets and words from the president are simply a continuation of his racist and xenophobic playbook," Rep. Rashida Tlaib said. "We cannot allow these hateful actions by the president to distract us from the critical work to hold this administration accountable to the inhumane conditions at the border that is separating children from their loved ones and caging them up in illegal, horrific conditions."

"So the first note that I want to tell children across this country is that no matter what the president says, this country belongs to you," Rep. Alexandria Ocasio-Cortez said. "And it belongs to everyone. And today that notion — that very notion — was challenged."

"Our squad includes any person committed to building a more equitable and just world. And that is the work we want to get back to," Rep. Ayanna Pressley said. "And given the size of this squad and this great nation, we cannot, we will not be silenced."

During the press conference, President Trump took to Twitter to double down on his statements, saying: "IF YOU ARE NOT HAPPY HERE, YOU CAN LEAVE! It is your choice, and your choice alone." He also accused them of being "anti-Israel, pro Al-Qaeda," and said Democrats' support of the congresswomen "means they are endorsing Socialism, hate of Israel and the USA." He also defended his immigration policies, saying, "Detention facilities are not Concentration Camps," and that it was the "Obama Administration [that] built the Cages, not the Trump Administration!"

Rep. Alexandria Ocasio-Cortez said the president attacked the congresswomen because he could not defend his policies. She said, "Weak minds and leaders challenge loyalty to our country in order to avoid challenging and debating the policy."