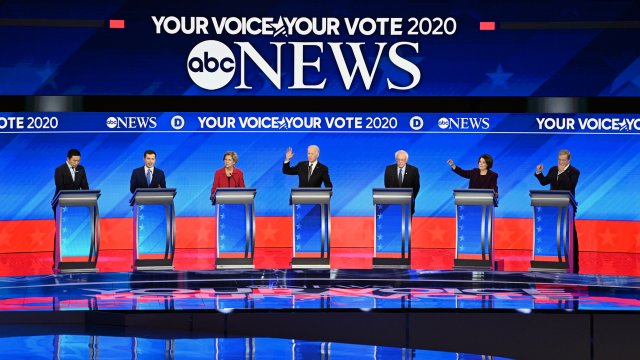 Just days before the presidential Primary in New Hampshire, seven of the top candidates squared off on stage during the eighth Democratic Presidential Debate in Manchester.

"America it's great to be on the debate stage, thank you." Yang said.

Yang was back on stage after failing to qualify last round.

The night started off with Joe Biden going after Pete Buttigieg after the former mayor led the state delegate count in Iowa.

"He's the mayor of a small city who has done some good things but has not demonstrated he has ability to, and we'll soon find out, to get a broad scope of support across the spectrum including African Americans," Biden said.

"A politics that says it's my way or the highway."--Are you talking about Senator Sanders?--"Yes, because we've got to bring as many people as we can into this process," Buttigieg said.

That was also the case on the topic of healthcare.

"Because two-thirds of the Democrats in the Senate are not on your bill and because it would kick 149 million Americans off their current health insurance in four years," said Sen. Amy Klobuchar.

"If we do what Joe wants, we'll be spending some 50 trillion dollars on healthcare over the next ten years, that's the status quo Joe," said Sen. Bernie Sanders.

"This is not about Hunter Biden or Vice President Biden or any Biden, this is about an abuse of power of by the President," Buttigieg said

"We need to end this war in Afghanistan, we cannot wait five more years, or ten more years or until we turn the corner more times," said U.S. Sen. Elizabeth Warren. "We need to bring our combat troops home."

Among key topics were climate change, trade and the Supreme Court. But there were some very contentious moments during a conversation about race and criminal justice reform.

"I think you should come over and disavow the statements that this man made that were openly racist that were wrong and the legislative black caucus is against," said Tom Steyer. "I'm asking you to do the right thing."

"I've already spoken to Dick Harpootlian and he infact is [was] I believe sorry for what he said," said Joe Biden.

"It's important to own up to the facts about how race has totally permeated our criminal justice system," said Sen. Elizabeth Warren.

"We invest in our young people in jobs and education, not more jails and incarceration," said Sen. Bernie Sanders.

The primary is on Tuesday, February 11th and then the candidates will square off again at a debate in Las Vegas on the 19th.