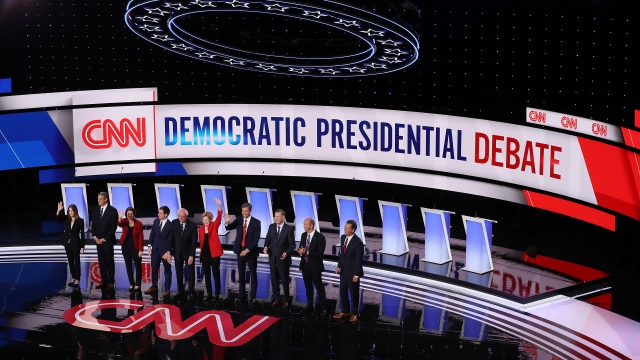 Ten Democratic presidential candidates took the stage in Detroit Tuesday night for the second round of debates.

The debate was hosted by CNN, and the moderators started with questions about health care, which was by far the most talked about issue of the night. All the candidates on stage support the ultimate goal of universal health insurance coverage, but each one has their own plan for how to get there.

"I'm proposing universal health care where everyone gets health care as a basic human right for free, but they have choices. My plan, Better Care, is fully paid for without raising middle class tax options," Delaney said.

"That's the concept for Medicare for all who want it proposal. That way, if people like me are right, that the public alternative is going to be not only more comprehensive but more affordable than corporate options around there, we'll see Americans walk away from the corporate options into that Medicare option," Buttigieg said.

"Because Medicare for all is comprehensive and covers all health care needs. For senior citizens it will finally include dental care, hearing aids, and eyeglasses. Second of all ...," Sanders said. "You don't know that, Bernie," Ryan said. "I do, I wrote the damn bill," Sanders said.

The more than two and a half hour broadcast touched on a variety of policy issues, including immigration, the economy, race issues and climate change. But the candidates were also asked to look ahead to the general election and explain how they could beat President Donald Trump.

"This isn't just a choice between the left and the center. It's not a choice just between some of these wish list economics or thinking that we have to sacrifice our values to actually win. What folks want is a fair shot. The way I won, the way we can win is actually focus on the economy and democracy aren't working for most people," Bullock said.

"And the reason we are going to defeat Trump and beat him badly is that he is a fraud and a phony, and we're going to expose him for what he is," Sanders said.

Many of the questions throughout the night pit specific candidates and their policies against each other, which led to some mudslinging ...

"You know, I don't understand why anybody goes to all the trouble of running for president of the United States to talk about what we really can't do and shouldn't fight for," Warren said.

"Everything that we are talking about here tonight is what's wrong with American politics, and the democratic party needs to understand that we should be the party that talks not just about symptoms but also about causes," Williamson said.

"They're not going to go along. Throw your hands up ... " Hickenlooper said. "Alright," Sanders said.

This could be the last chance for some of these candidates to appear on a debate stage. The polling and donation requirements for the debates in September and October are more stringent.