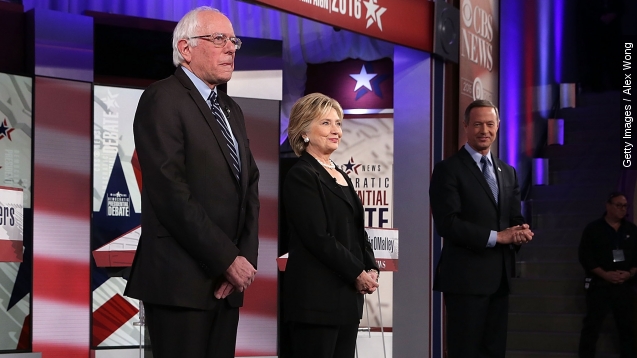 The attack in Paris Friday has reinvigorated discussion about the possibility of ISIS members using the refugee crisis to infiltrate nations offering asylum.

That discussion made its way into the second Democratic primary debate hosted by CBS, which altered its format to focus more heavily on foreign policy after the attack.

Before the debate, frontrunner and former Secretary of State Hillary Clinton and former Maryland Gov. Martin O'Malley agreed the U.S. should let in 65,000 Syrian refugees to deal with the crisis. Vermont Senator Bernie Sanders agreed America should open its borders but couldn't pick out a magic number. (Video via CBS,Bloomberg,NBC)

And despite the attacks in Paris, those positions didn't change at all.

"What the magic number is, I don't know because we don't know the extent of the problem but I certainly think the United States should take its full responsibility," Sanders said, starting off the discussion.

"That needs to be done, with proper screening. Accommodating 65,000 refugees in our country today of people of 320 million is akin to making room for 6 and a half more people in a baseball stadium with 32,000," O'Malley said.

"But only if we have as careful a screening and vetting process as we can imagine, whatever resources it takes. Because I do not want us to in any way inadvertently allow people who wish us harm into our country," Clinton said, agreeing again with O'Malley.

It's a far cry from some of the sentiment from their GOP presidential opponents. Senator Ted Cruz said the U.S. should freeze any plans to bring in any more Syrian refugees. Dr. Ben Carson, drew an even harder line saying he wouldn't allow "them to come here in the first place."

Nations all over the world are grappling with this issue. Poland has decided to close its doors to refugees and wants the EU to revisit its current policy. (Video via Al Jazeera)