Dementia May Be Part Of What's Killing Off The Bees 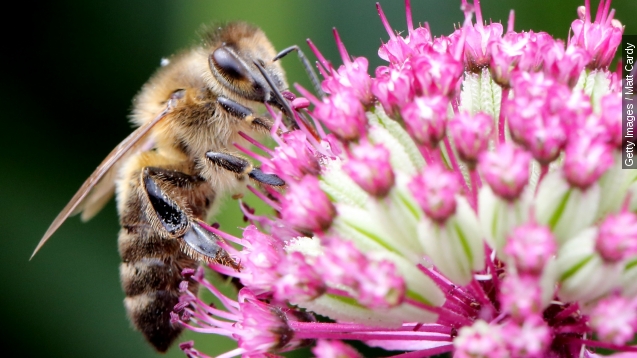 SMS
Dementia May Be Part Of What's Killing Off The Bees
By Ben Lawson
By Ben Lawson
June 7, 2015
Scientists have another theory about what could be killing off the bees: dementia caused by aluminum poisoning.
SHOW TRANSCRIPT

Another day, another theory about what's behind the mysterious disappearance of the Earth's bees. (Video via BeesOnTheNet / CC BY 3.0)

This time it's dementia caused by aluminum found in nectar. Aluminum is considered a neurotoxin and some have linked it to Alzheimer's disease in humans, although that hasn't been definitively proven. (Video via epSos.de / CC By 3.0)

The study, published in the journal PLOS One, said in human brains, aluminum content above 3 parts per million could lead to Alzheimer's disease. Researchers found aluminum levels in bee pupae that ranged between 13 and 193 parts per million.

The researchers in the study described aluminum as the "most significant environmental contaminant of recent times," adding to a long list of research citing aluminum's harmful effects.

The levels of aluminum present in acid rain are known to be incredibly harmful to certain species of fish, and the EPA warns it can even completely eliminate a species from a specific body of water. (Video via Christian Ashby / CC by 3.0)

The damage done to soil has also been linked to deforestation because it robs the soil of nutrients the vegetation needs in order to grow.

Aluminum in acid rain can also cause crops to deteriorate or stop growing because plants are able absorb nutrients and water naturally.

And now biologists from Keele University and the University of Sussex want to add bee dementia to the list of aluminum's harmful effects.

Bees have pretty complex brains. There is even some research suggesting they may have some capacity for memory. Since bees need their brains to collect pollen and nectar for food, dementia would pose a significant risk to their survival.

There are a lot of theories out there on what could be killing off the bees, the most prominent being pesticides.

One of the authors on this recent study says it could be a culmination of several things, "It is widely accepted that a number of interacting factors are likely to be involved in the decline of bees and other pollinators – lack of flowers, attacks by parasites, and exposure to pesticide cocktails, for example."