Candidates Square Off In Second Night Of Democratic Debates 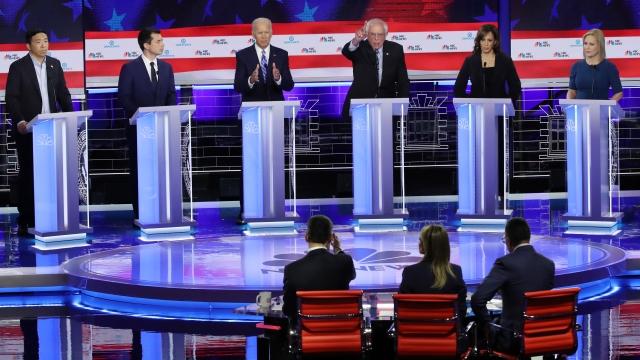 On night two of the Democratic debates on NBC, former Vice President Joe Biden was the biggest name on stage, which made him the biggest target throughout the night.

"Joe Biden was right when he said it was time to pass the torch to a new generation of Americans 32 years ago. He's still right today," Rep. Eric Swalwell said.

Again, candidates got just 30 or 60 seconds to answer the moderators' questions, and the policy questions were largely similar to night one.

A new topic discussed Thursday was the idea of a universal basic income, one that Yang has made a central part of his campaign.

"It's difficult to do if you have companies like Amazon, trillion dollar tech companies paying literally zero in taxes while they're closing 30% of our stores. ... It would be the trickle up economy from our people, families and communities up. We would spend the money and it would circulate through our regional economies and neighborhoods," Yang said.

The intersection of immigration and health care united all 10 candidates. When asked whether their government provided health care plans would cover undocumented immigrants, every candidate raised their hand to say yes.

Many of the candidates also agreed on free college education. Buttigieg explained why he wasn't among them.

"I also believe in free college for low and middle income students for whom cost could be a barrier. I just don't believe it makes sense to ask working class families to subsidize even the children of billionaires. I think the children of the wealthiest Americans can pay at least a little bit of tuition,” Buttigieg said.

The issue of race brought some tense moments between two of the top candidates — Biden and Harris.

"Do you agree today that you were wrong to oppose busing in America then? Do you agree?" Harris asked.

"I did not oppose busing in America. What I opposed is busing ordered by the Department of Education. That's what I opposed," Biden said.

"Because your city council made that decision. It was a local decision," Biden said.

"So that's where the federal government should must step in. That's why we have the Voting Rights Act and the Civil Rights Act," Harris said.

Throughout the evening, everyone on stage was jockeying for as much speaking time as they could get.

“Hey guys, you know what? America doesn’t want to witness a food fight they want to know how we’re going to put food on their table,” Harris said.

The next Democratic debate is set for July 30 and 31 in Detroit, and it will again put 10 candidates on stage each night.