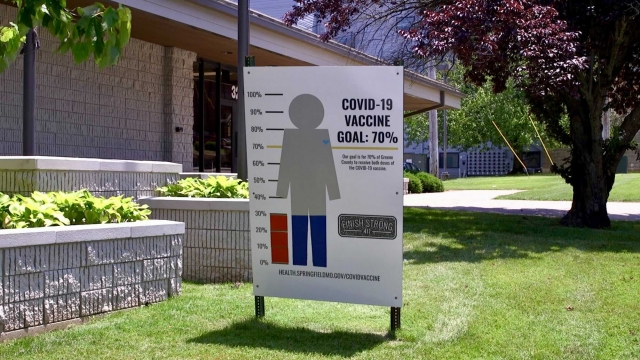 Jeff Goetziner is the owner and chief pharmacist at Orchard Hills Pharmacy in Springfield, Missouri — a community that has become a hot spot for a new, highly contagious variant of COVID-19.

"It's somewhat frustrating because we'd like to reach more people," he said. "The vaccine is readily available."

Missouri has 30% of all Delta variant cases in the U.S. — the highest in the country. That’s up from just 7% a week ago.

The state also has one of the lowest vaccination rates in the country — only 38% have been fully vaccinated. And the numbers are even lower in western and southern counties.

"Nearly every death, especially among adults, due to COVID-19 is, at this point, entirely preventable," CDC Director Dr. Rochelle Walensky told reporters this Tuesday.

Experts say vaccines protect against severe illness and death from the Delta variant.

"I kind of feel like we've reached a saturation point where the people, most of the people who want to get vaccinated have been able to," he said.

Just one-third of people in Greene County, which includes Springfield, are fully vaccinated and many say they're not planning to get the jab anytime soon.

"Haven't gotten it, probably won't get it," said Cindy Hillenburg, 53.

"I know it's a new vaccine so I'd rather wait to see what happens in the future with that," Simon, a 21-year-old Springfield resident said.

Meanwhile hospital admissions in Greene County due to COVID have spiked sharply in the last month, with just 49 admissions on the first day of June... now over 160.

And, the county Health Department says 89% of new cases in Springfield are in people who have not been fully vaccinated.

"We're seeing much younger patients. They do seem to be sicker," said Steven Edwards, president and CEO of CoxHealth, a hospital network in Springfield.

"The reality is I can walk around our hospital and walk in our COVID ICU and I see people I know," he said.

Edwards says the influx of new patients is already putting strain on hospital staff, and he's worried more hospitals in the state will see surges soon

"To say that our state's ready and the south is ready, I don't think it's true. We've got to prepare for the worst," he said.

Some of the locals seem to be heeding the warning signs.

"Actually this Friday I have it scheduled to get it," said Josiah Williams, 21.

"I'm going to get it today. And I do recommend that everybody gets it," said Judith Frank, 57.

Even Goetzinger says he's starting to see more people coming in for their first dose.

"Some people are saying that they're having an increase, you know, at work," he said. So they're concerned about that. They have a loved one or friend who is either in the hospital."