Deliberations To Continue In Sex Abuse Trial Of Ghislaine Maxwell 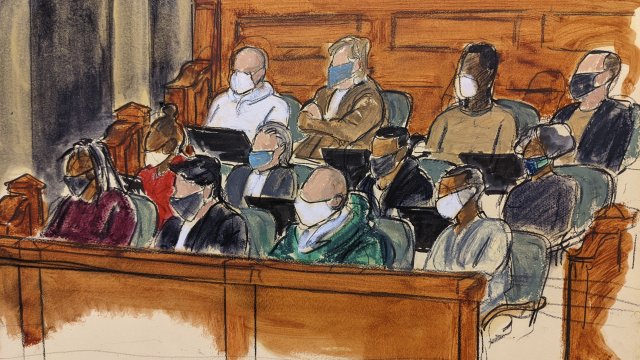 SMS
Deliberations To Continue In Sex Abuse Trial Of Ghislaine Maxwell
By Associated Press
By Associated Press
December 22, 2021
On Tuesday, the jury signaled that a verdict was not imminent when it asked to finish deliberating Wednesday at 4:30 p.m.

The jury entered its second full day of considering the fate of Maxwell after hearing from witnesses and seeing evidence for three weeks as prosecutors tried to prove that Maxwell was the crucial enabler of financier Jeffrey Epstein's proclivity to sexually abuse teenage girls.

Maxwell, 59, was arrested in July 2020 on charges she groomed girls as young as 14 to think it was acceptable and normal for them to engage in sexualized massages with Epstein, her onetime boyfriend and eventual close friend and employer, in return for $100 bills.

Prosecutors say she sometimes joined in the abuse between 1994 and 2004 after recruiting girls with promises that Epstein's wealth and connections to powerful people could fund and enable their dreams. Often, the girls came from financially strapped families living in desperate or strained circumstances, the government said.

On Tuesday, the jury signaled that a verdict was not imminent when it asked to finish deliberating Wednesday at 4:30 p.m. The judge has told jurors that they can deliberate Thursday as well, if they wish.

They also requested and received transcripts of the testimony of three of four women who alleged that they were abused by Epstein with help from Maxwell when they were teenagers. Some of the women testified that the sexual abuse they endured escalated over time.

Defense lawyers contend that Maxwell is being prosecuted as a scapegoat after sex trafficking charges brought against Epstein dissolved after his August 2019 suicide in a Manhattan federal jail a month after his arrest.

Maxwell was arrested a year later and has remained behind bars ever since as Judge Alison J. Nathan repeatedly denied bail requests, even after defense lawyers offered to secure it with a $28.5 million pledge and around-the-clock armed guards to ensure Maxwell did not flee.