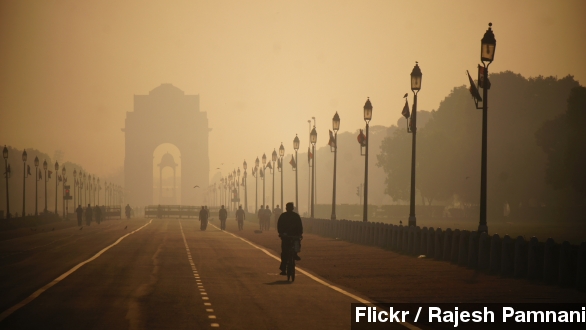 By Adam Falk
May 8, 2014
The World Health Organization released a list of the cities with the worst air pollution. Half of the top 20 are in India.
SHOW TRANSCRIPT

​Air in most cities that monitor pollution levels is unsafe, according to a new report from the World Health Organization. It lists the cities with the most polluted air.

Topping the list is Delhi, and Euronews' video makes it easy to see why. Delhi is closely followed by another Indian city, Patna. Both report about 150 micrograms of PM2.5, an airborne particulate matter that's harmful to health.

The WHO considers 25 micrograms a safe limit. Those two cities have that six times over.

CNN reports, "PM2.5 refers to the diameter measured in microns of particulates such as ammonia, carbon, nitrates and sulfate -- which are small enough to pass into the bloodstream and cause diseases such as emphysema and cancer."

You thought the air in China was bad. (Via CBS)

"And even toddlers don masks."

Actually no Chinese city, not even the smog-covered Beijing, cracked the top 20. (Via CBS)

But hold on. Reports indicate China's data came from 2010. Bejing has been posting PM2.5 numbers hourly since January 2012. (Via Flickr / mckaysavage)

The top graph shows PM2.5. At press time, Beijing was at Delhi levels. And the city reportedly recorded an average of about 90 micrograms last month, which would put it at number 17 on the WHO's list. (Via World Air Quality.info)

​As the list stands now, Indian cities make up half of it. A few in Pakistan and Bangladesh also ranked highly.

And that’s exactly WHO's goal with this data. It's not trying to shame Delhi, but rather spark greater awareness and hopefully change.

It reports, in general air pollution is getting worse due to "reliance on fossil fuels such as coal fired power plants, dependence on private transport motor vehicles, inefficient use of energy in buildings, and the use of biomass for cooking and heating." (Via Flickr / Yuri Virovets)

A WHO report released in March found air pollution killed about 7 million people in 2012. This figure "confirms that air pollution is now the world's largest single environmental health risk."