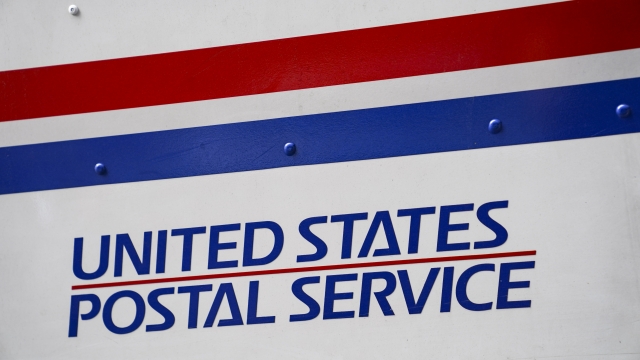 Neither rain, nor snow, nor heat, nor gloom of night is the longtime unofficial post office motto — but there's no mention of massive staffing shortages.

Garrett Figuerla is a Bozeman resident.

"They said they had carrier shortages on several routes," Figuerla said.

Much of America still depends on mail six days a week for deliveries of prescriptions, bills, payments and COVID test kits.

But some people in Bozeman, Montana say they've gone more than a week without anything delivered; no letters, no bills, nothing.

"I had put a bill in the mail three days ago and it stayed in my mailbox, and so on the way back from dropping the bill off, I decided I was just going to come in here and see what was going on, and they said that people have quit and we're not getting our mail," said Vicky Riojas, a Bozeman resident.

"The last couple of days, the deliveries that were supposed to be dropped off at our home have not been delivered. They've put a note in our mailbox saying that they're undeliverable," said Sara Elushik, a Bozeman resident.

It's not just Montana. Across the country, similar stories of gaps in service can be found from Minneapolis to Kentucky to Boston.

Paul Steidler is a USPS policy expert at The Lexington Institute.

"When the Postal Service told us repeatedly, loudly and very clearly in return for the lower the longer delivery times, you're going to have more reliable service. It's extremely disappointing to see what's going on not only in Montana, but the current situations that you mentioned, and Massachusetts, Kentucky, Indiana," Steidler said.

This report admits this is a problem years in the making and was made worse by the pandemic.

A 10-year plan released by the USPS in 2020 aimed to improve employee retention and speed up the hiring process.

Steidler says the USPS has hired more people, which he says makes this more confusing.

"I mean, staffing is at the highest levels in 10 years, mail delivery is down about 30%," he said.

Steidler says another thing could be at play: package delivery.

"You have mail volume going down this significantly and package volume going up. That's a much more labor intensive area that people have to be involved in," Steidler said.

Back in Montana, a source inside the Bozeman USPS, who asked not to be identified for fear of retribution, sent Newsy photos of what they say is mail stacked up in the office. The source said some piles waited five days to go out and on one day alone, five separate routes didn't leave the building. That's anywhere from 500 to 1000 addresses per route.

Postal Service emails obtained by Newsy explain the challenge of finding workers because of competition from fast food restaurants and gas stations that pay the same or higher wages.

"We've been struggling. We had to overburden our employees," an Ohio USPS worker said.

A source inside the Bozeman post office says they've gone from more than 120 employees to less than 50.

USPS representatives tell Newsy Bozeman is a high growth city and they have four jobs available with four more to be posted.   But we found this job fair posting from April advertising 60 open positions.

The USPS response if a customer misses delivery one day because of staffing, they will get their mail the next day.

That's not what these frustrated residents are seeing.

"People are not going to go through the time and the trouble to complain about the U.S. Postal Service, unless there are serious problems there that have been going on for a while. And that are that are quite frustrating. If stuff were getting fixed in a day or two, nearly all of those complaints would go away. The photos that you had of the mail being stacked really in disarray. And what you know is clearly a chaotic looking fashion is very, is very, very disturbing," Stiedler said.

We contacted the offices of Senators Jon Tester and Steve Daines of Montana, who within a day of our correspondence wrote letters to USPS leaders asking for permanent solutions.

That might be easier said than done, but for now expect to see a lot more USPS job fairs with managers hoping they'll deliver a solution.

Matt Imwalle is the manager at the Lakewood, Ohio USPS.

"This is going to go all summer long. We're going to keep doing this until we get the employees we need to have," Imwalle said.

Steidler says more trouble lies ahead if it doesn't get worked out before the USPS hits the peak holiday season and November in an election year.